Stolen Apple is a band that has been around a while and they recently released 'Trenches' so I thought I might take listen...

I tend not to review albums in general but when Alessandro Pagani contacted me I decided to take a look.

I decided to do ZERO research on this band before I reviewed the trenches album because I really wanted to share with guys my own view of the trenches album and not be biased for or against what others write - it seemed like a plan!

So lets take a look at what I found and my humble views about Trenches from Stolen Apple.

Right from the start I had absolutely no preconception about Stolen Apple or indeed this 'Trenches' album which I think is always better. Are these rock based? or Indie? or... well you name it - I had no clue. I come from a distinct rock background and for me the 'punk' era did not suit my taste, but later music twisted in to grunge and that went in to.. well you get the idea.

Of course today there are so many genre's of music it can all be a bit mind boggling so let's not really pin down Stolen Apple in this way (at least until later) and as you will see with my views of some of these tracks on Trenches they are far and away different than the bands perception is (more on that later). So let's kick off with the tracks:

I liked the nice tones from the guitar... sort of jangly. The thing is, (believe this or not) I thought that this track had a reminiscence of the earlier days of the Beatles. Yes I WAS around then, but only about 7! A sort of mid 60's jamboree! Indeed I guess that my interpretation might be nothing like others, but that all depends on one's personal historical musical journey and maybe what I might be listening to in general these days.

Not a particularly bad track at all but not one of my favorites really - a sort of 'middle of the road' indie type of song that strangely (I know:) had a vocal sort of 'Tom Petty' reminiscent somehow.

Best word I can say is... 'Jangly'. Not really my style of music I would listen to but for the guys that like it they will of course... like it!

Ah the first track I can say that was more in keeping with the sort of stuff I might find in my car that I listen to. It's a sort of laid back track where the guitars make way for a nice gritty vocal. By 4:30 this track gets a little heavier and I could almost think that while listening to this that I might have been listening to a recreation of Pink Floyd... but somehow a whisper of them rather than a scream.

This track to me was a more 'punky' track and not really my style so I'll pass on this one although the fraternity of that genre will like it no doubt.

The first track that I feel is really good (based on my rock background of course). Ha the vocals seemed to turn back to a 'Tom Petty' likeness in a weird way (no bad thing for sure) Great vocals and I liked how this track seemed 'psychedelic' in places. One to listen to for sure.

Again a really great track that is more laid back - and I would still describe this myself as rock based .. again sort of 'Floyd' cultured

This more lively track was far more energetic and lively with nice melodic parts as you move through it. I liked this track not quite as much as say 'Living on Saturday' or 'Mystery Train' but it does have its own feel.

Not one of my favorites for sure, but it does (for one of the few times really) break in to a guitar 'solo' somewhere at 1:55 which stands out as there are not really that many lead breaks.

Again this is a laid back rock track in reality - the sort of stuff I will sometimes listen to and it even has a mouth organ in there (or maybe simulated who knows). I would describe this again as a modern day style of cool rock music... nice.

Maybe they did sell out for this track! Not for me really and it has a definite nod towards the indie stuff.

A different style for sure compared the 'Red Line'. Again this is a laid back approach and again it has that 'whiff' of Floyd in there. There is a guitar out too from round 3:40 and I liked this track but some of the others were a bit more what I am used to in music that I listen to.

Clearly Stolen Apple have been around for a while and they know what they are doing and that shows in the music on the Trenches album. There's a good mix of styles on here, but they meld together well I thought. While I did confer that some of the music reminded me of other stuff, factually that is no bad thing. Let's face it, if Stolen Apple go on to be half as good as any of those bands I mentioned they will be very successful indeed.

For anyone that likes rock and indie rock buy this album, for the punk guys maybe less so because there clearly is an influence, but not as much as some of the other genre's on here.

Thanks to Alessandro Pagani for sending me the info. 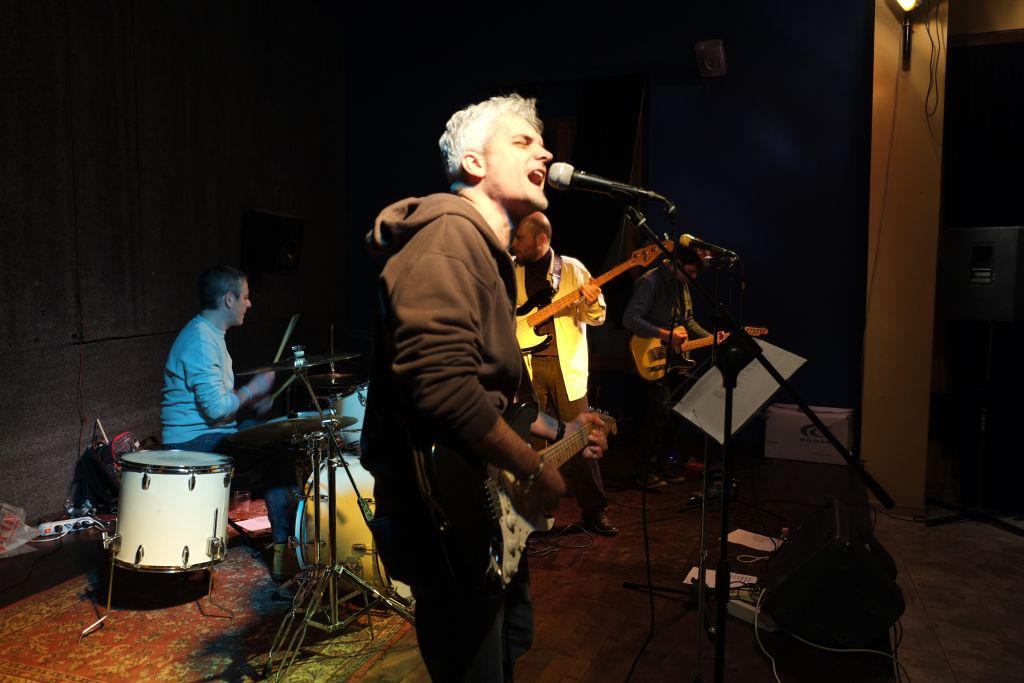 The band was formed in Florence in 2008 by the ashes of the Nest, authors of two works published respectively for Urtovox/Audioglobe ("Drifting", 2001) and Zahr Records/Blackcandy-Audioglobe ("Isn't ' it?, 2007). Of the original nucleus, (material and news on Myspace.com/nestband) remain two founding members, namely Riccardo Dugii (vocals, guitar), and Luca Petrarchi (vocals, guitar); To complete the organic Massimiliano Zahedi, already aggregated to the Nest as percussionist in some acoustic experiments and here on bass, and Alessandro Pagani (formerly drummer of Subterraneans and one of the minds of valve/Shado Records), present in the formation for a Period in the mid-90 when the group was called the "astray".

The name of the band was inspired by the story of Ernst Lossa, child jenish killed in the 1944 by the Nazis in the context of their program of extermination of individuals not self-sufficient, narrated among others by Marco Paolini in his show "Ausmerzen".

- Video of the last concert at Circus Club and interview on "Indie Eye Network": https://www.youtube.com/watch?v=lzTia_Oujak
- Interview on May issue of "Immersion Magazine" Canada
- "Trenches" in hot rotation on BCB Radio Bradford, Uk
- Month's album for "Sounds Good Webzine"
- The movie school "Image" of Florence will use the Stolen Apple music for the short movies of their students
- The song Daydream was simultaneously aired in more of eighty European radio stations on the broadcast
"22 minutes, one week of Europe in Italy" on Friday 21 April 2017 (podcasting program on a European radio station network): https://it-it.facebook.com/22minuti/)

Twelve soaked songs of heterogeneous sounds and ambivalent meanings, the debut album of Stolen Apple recounts experiences in and out of the music in a kaleidoscope of raw sounds and words full of intimacy. The debut album (but not that it is not, the songs speak and tell us that behind the music there are years and years of passion), draws different emotions song after song, transporting the listener to different stages of abandonment: this is not the mission that the music must carry? Stripped of all prejudice and away from trends, Dugini, Petrarchi, Zatini and Pagani have wanted to implement in the most natural way their sound 'live', alternating in a modern personal style and originality, while always keeping in mind the immense artistic heritage left by past greats. By mixing alternative rock of various schools (especially American 90s), desert country, psycho-punk, shoegaze, paisley underground, pop-noise, acid ballads and alt-country sound, the crossover sound of the band involves keeping attitude and ability to be credible moving through difficult lands as it is to those who make music today.

This record is an open book of memories, shared stories and adventures: the twelve songs are the result of a collective work, although done without explicit planning. Because the only thing that matters is the free movement of ideas: each song is an expression of the independent spirit of the band. And it is for this reason - the absolute compositional autonomy and unnecessary pursuit of perfection- that each song has its own identity yes, but just as many facets and many sound suggestions. This comes from the common purpose of the group, which has always been the fulfillment of his passion, without constraints related to technical assertions, mode, or outside involvement.

Trenches is an album with a strong and evocative title, and bequeaths to us, if a message has to pass an artistic work, an urgent thought, which places him disillusioned look at the hopes of our youth: where futuristic visions have been lost, or are been disillusioned by the vanish (in contact with reality) of concepts related to love, peace and freedom, the music reconciles the dream. That to which he aspire, and that the modern shelter in trenches, the 'security zones' where our weaknesses lie, is slowly - but surely - changing the outlook of life.

SHORT BIO:
The band was formed in 2008 from the ashes of Nest, authors of two records published respectively by Urtovox/Audioglobe ("Drifting", 2001) and Za Records/BlackCandy-Audioglobe ("Isn't it?, 2007). From the original nucleus, (material and news about Myspace.com/nestband) are two founding members — Riccardo Dugini (vocals, guitar), and Luca Petrarchi (vocals, guitar); to complete the organic Massimiliano Zatini - already aggregated to Nest as percussionist in some acoustic and experiments here on bass - and Alessandro Pagani (former drummer in Subterraneans and one of the masterminds of Valvola/Shado Records), in training for a period in the mid-90 's when the group was called Malastrana. The band's name was inspired by the story of Ernst Lossa, jenish child killed in the 1944 by the Nazi as part of their program of extermination of individuals, narrated among the others by Marco Paolini in his show "Ausmerzen".

Thanks to Alessandro Pagani and I wish Stolen Apple well.