Original Stratocasters are hard to find these days, this one is not quite original, but it sounds nice.

This is a 1962 Olympic white Fender Stratocaster that I bought some years ago for just £700 ($1200) It had been messed with somewhat but thats just the way life is on an old guitar unless you want to spend a fortune on one which I don't.

One of the guitars that I bought on a whim at the time at the end of the 90's for what was basically a low price. While it clearly had parts swapped out the overall guitar was still of the era and a nice olympic white just like Jimi's.

Many of my guitars are reviewed on this site, some just a short review but some in great depth. Often the ones I have sold (like this 62 stratocaster) only have small bits of information about them, but I guess I can't go back and write about something I had 20 years ago from memory.Don't forget to visit the IMAGE GALLERY with a section showing my guitars in hi resolution images; these are being updated now so expect more to come online. Many of my guitars are quite rare now. This 1962 Stratocaster has seen lots of work over the years; refinish, pickups, toggle, you know the sort of thing. But it has a very rare 'D' neck. This does not refer to the 'shape' of the neck, but rather the Fender description of size (width probably). The D neck was the smallest width neck they ever made some say and I've never seen another anywhere either in the UK, USA or on other travels. 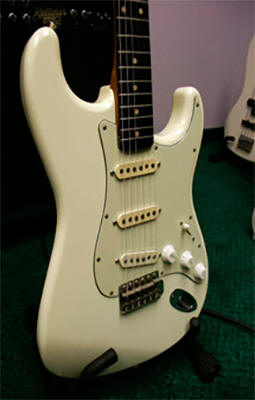 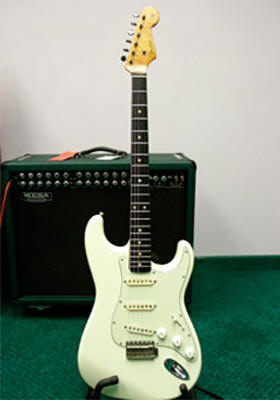 These are very rare guitars where ever you look and most of them are very tatty with lots of things wrong, this one was playable but that neck was tiny.

In 2006 or thereabouts this one was sold to someone on mainland Europe and its likely he still has it over there or he might have stripped it for the original parts as often guys do. The wear and tear had taken its toll on this guitar over the years and the action, the frets were well down and the noise from the pickups when near to almost anything when plugged in made me to eventually sell it. There's no point in palying a guitar you can hardly hear over the noise coming from interference is there.