Triaxis Preamp for Mortals: me and you!

My Triaxis rack set-up; it's now been sold (in 2005/6) but remains a good reference for the setup if anyone has just bought one even in 2019!

Here's a shot of my own Triaxis based rack system from when I had one; I sold it a number of years ago but they are as good today as they were then!; this photo was updated from an even older rack but was updated and included an Intellifex (long sold and replaced with a TC G-Major II) for ambient reverbs (controlled by the ground control gear in real time), a Digitech quad 4 (also gone) and a Samson power clean which I still have in 2019. Get it all working well.

The rack had to be upgraded to a 12U rack and this became rather heavy. This system is also described on the Triaxis in use page in this section of the website;  I do hope you like it; it took me a long time to build up the components to a level where I was completely satisfied with the results. The last upgrade of this rack was the Digital Music Corp. Guitar Audio Switcher & Guitar Audio Mixer controlled by a Ground Control Midi foot controller from the same company; I still have those for other use today in my rack gear along with a Rocktron Miodi Raider and Patchmate 8 switcher in a separate rack. Why not visit their site right now to see a full description of their equipment on offer - The System Mix Plus is discontinued, but there are other units around from other makers that do the same thing. I can only speak good vibes about this switching system and it remains one of my favorite pieces of gear to date, unlike lots of second rate ( and mainly second hand ) switchers around.

The first picture was my last Triaxis setup with the old one below it. Then a picture of the back of the rack.

It seems that there was a move by manufacturers to drop production of this type of equipment for a couple of years; It took some time to track down this equipment solution so do visit their site and you may well find that what they offer fits the bill like no other gear in the world; update the Rocktron stuff is cool too and cheaper; oh and if you live in the UK then you can get DMC gear from Sounds Great in Manchester ( Tel 0161 436 4799 and ask for Rick if he's still there). They have a guy there that actually has a clue about what he is doing; you've probably met the rest of the many "experts" in the music shops who simply don't know their elbow from their false teeth; give these guys at Sounds Great a call you've got nothing to lose and much to gain.

At the bottom of the page are some presets to download. Also below are my older presets for the Triaxis there are some great sounds in this table and they have taken a long time to hone; compare them with the table previously on the page which reflected some of my even older sounds; there's a vast change; mainly due to the differing methods that I use to play guitar today. Here's the May 2000 presets (actually these remained until 2005 when I sold the Triaxis) that's as new as they get I'm afraid; they do remain my copyright. Because I do not have the Triaxis any longer I cannot offer any more presets, but these are all ok.

The presets below are (c) Tony McKenzie 1998/2015 and some are copyright of others but you may use them for tweaking your own sounds in your Triaxis set-up. I hope you like them. I have moved on even further since these sounds were developed. So checkout the Triaxis pages on this site to get a rundown of exactly where you can get the info to set up your rig. 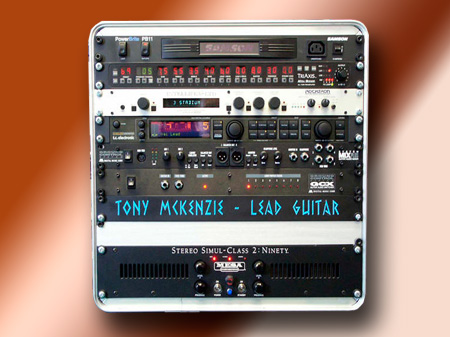 The Triaxis and 2:90 in my rack with the G-Major effects unit; click for larger view 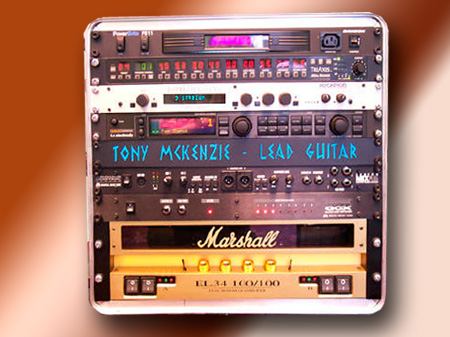 My older rack setup with a Marshall 100/100 not recommended