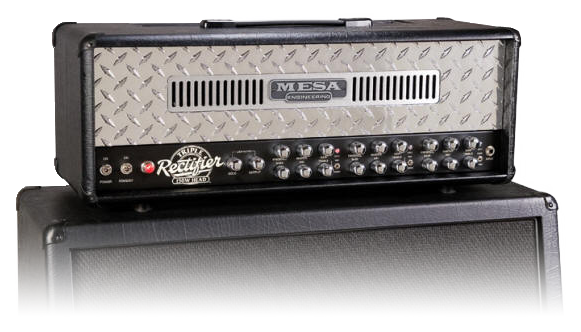 Now there's a Mark II version of the Triple Rectifier the Mark 1 units are going to get even cheaper on the second hand market. Use this fact to barter the price down. That's good if you are buying and bad if you are selling. So if you don't have one of these - get one, and if you do and want to sell it ask yourself why you want to sell one of the best amps around. It's probably because you never really did get the sounds you wanted, and that's probably because you did not quite use the techniques not covered in the manual. Over these pages we tell you how to do it properly - or at least point you in the right direction.

Heres the Specs of the fire breathing Triple rectifier from mesa Boogie - and it really does breath fire - but not as you might think, ouch... thats hot...

This is the Mesa Speak:

1989 was the fork in the road here at Mesa/Boogie. It was the year we embarked on a mission to Rectify high gain guitar and reintroduce MESA Engineering® to the world. Since the early 70's the Boogie™ Mark Series amplifiers have been famous for their gobs of overdrive and liquid sustain, making them the choice for a solo voice. Combining this thick gain with our on board 5 Band Graphic EQ produced lethal crunch as well and these trademark sounds propelled players and MESA® into the spotlight for 20 years.

Still, we yearned for more in our mosh. We envisioned a menacing sound with the creamy voice of a Boogie, yet with huge low end that could track faster and stay tight even under the most extreme settings. In the early dawn of the goatee and tattoo era we longed to create another classic…a statement of the times, like the mighty little Boogie of the 70's. Our quest ended in the Dual & Triple Rectifier® Heads and the rest is history. Ten years later, the patented Dual Rectifier® Series amplifiers continue to astonish us with their success.

Throughout the 90's we introduced several other models in this line aimed at milder gain styles and they too found their legions of devotees. Yet with hundreds of hit recordings and thousands of ecstatic customers, the Dual & Triple Heads remain the mainstay of the Rectifier phenomenon.

So it is with reverence, pride and excitement we introduce the Newest Rectos…The Three-Channel Heads!

These new machines of mayhem unleash all the punishing gain found in the original Rectos' two channels and add a powerful third channel dedicated to rhythm sounds. The high gain lead channels now each have an additional mode dubbed RAW that that travels the region of gain below that of the original VINTAGE mode. RAW, with its' touch sensitive response, lets you explore the heavier side of blues on up to classic rock …revealing the soulful nature of this amazing tube rectified power section.

Here at tonymckenzie.com I agree!

Check out this whole section on the Triple Recto - its an awesome amp and one which you really should hang on to. LEARN how to drive it properly and you will keep this amp for life, or at least until there is something that changes sound like the rectifiers from mesa boogie did in 1991. I'm still waiting for the next wave and I don't mean the Mark II version of this - oops it did happen.