The Road King II. Here we talk tube bias settings of this amplifier, the meaning of fixed bias for tubes and why it matters.

Tube bias hopefully you have heard of that? right? Well if not, this is not the place where you come to find out how to open your amp, get out the meter, turn the amp on and... bang, you are no more! You may well kill others as they try and get you disconnected from the power. The Road King is a biasfixed affair.

PLEASE - UNDERSTAND THAT TUBE AMPS ARE NOT TO BE PLAYED WITH INSIDE BY YOU UNLESS YOU ARE FULLY QUALIFIED TO DO SO. THERE IS NO QUESTION IF YOU DO NOT KNOW WHAT YOU ARE DOING YOU CAN EASILY BE KILLED. I ACCEPT NO LIABILITY WHATSOEVER FOR YOUR ACTIONS. THIS SITE IS NOT DESIGNED FOR TRAINING YOU ABOUT TECHNICALITIES OF TUBE AMPS OR THEIR REPAIRS OR MODIFICATIONS.

This page is similar to the page within all the Mesa Boogie Pages for biasing on this website.

Even if you do know what tube amp bias is all about I am not really going to give you each and every aspect of this subject down to the wire on this website.
This section of the site is really to give you some of the views I have built up over the years about tube bias and how I think some of this stuff could affect you and/or your triple Rectifier amp from Mesa Boogie.

Lets start at the beginning: Mesa Boogie amps have what is called a 'fixed bias' inside their amplifiers. This bias is often adjustable on many amplifiers with particular tubes inside. For example, 6L6 and EL34 tubes are usually 'bias adjustable' in one way or another but EL84 are usually regarded as not. So, for example, in a Marshall amp using EL34 tubes there is a small adjuster that is used to set the 'bias voltage' to the correct level to make the tubes work properly.

So good so far.

But in a Mesa Boogie amp, the designer (Randall Smith) decided to 'fix' the bias voltage at a particular point. One reason is all those years ago Randall saw many amps that sounded bad or simply stopped working because the 'bias voltage' was incorrect - whether adjusted by non techies or maybe some other reason. But in his wisdom, Randall fitted a resistor to a specific value in the circuit instead of an adjuster. Why? I hear you ask. Well, if the bias voltage is fixed; you always know what it is; therefore, Randall Smith could just sell you some tubes that meet a criteria where his fixed bias voltage was just right for his tubes. In other words, instead of getting a techie to install your tubes and then bias the amp; you just put the mesa tubes in your amp and that's it!
Nice. But the Road King has two differing sets of tubes (EL34 AND 6L6) so this amp is somewhat of a conundrum. However - you cannot change the 6L6 for EL34 or EL34 for 6L6 in this amp.

It is nice, but not always what some guys want. For example, what if you decided that you wanted some GT Tubes and did not want to buy tubes from mesa boogie? The supplied tubes may or may not work correctly in your amp - even though they are the correct type - they may well need a different 'bias voltage' than the one set by Randall in his design.

Oops what now? Basically they probably will work - but either the sound will be rubbish or the tubes will run hot, or they will fail early or... well you get the picture.
So if you buy mesa tubes no problem. Remember mesa boogie tubes are really just like all the other tubes (within reason) out there; but mesa have graded theirs in to what works for their amps - in other words they have taken away all the hard work. But the same tubes, but ungraded are available at a cost saving - and sometimes a BIG cost saving.
Musicians being what they are, will also often cite different brands of tubes as making their amp sound different. We can talk about this all day, and I'm sure some would agree with that statement.
But you know what, while there may be a slight difference in tone between one brand or another, its just one aspect of the overall tone of you - and I would not get too hung up on the brand of a tube. You could take the easy way out and buy mesa tubes.

What if you want to use different branded tubes than mesa (same type) or just want to save some money? You could buy third party tubes GT, Svetlana or many other brands, or even some vintage tubes for your amp. Now there's a problem. Unless you specify exactly what you want, then the supplier can't send some suitable for your amp (remember the voltage is already set) and secondly, if you do buy vintage tubes you have no chance of fitting them to your amp probably without a bang.

OK what's the answer? The answer is to modify the single fixed resistor with a kit that you can fit inside the amp and then fit new tubes, bias correctly and hey presto - it all works. The kit is available from HERE but remember you lose your warranty or you life or both if you don't know what you are doing! 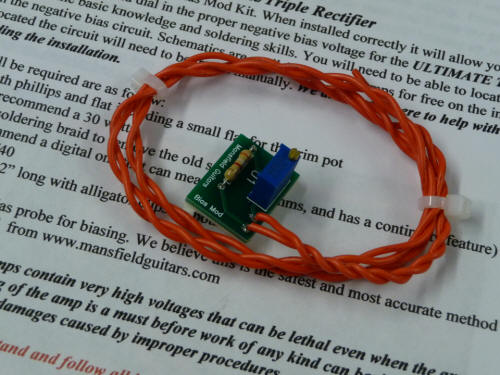 The Bias Kit from Mansfield Guitars in the USA; click for larger image

Here is the modification, but I don't want to use different tubes than the mesa boogie supplied ones. Is there any reason why I need to know about this bias stuff? Actually, yes there is.
You see, when Randall and his mates decided to make the bias voltage 'fixed' he decided that to overdo the voltage fries the tubes and they fail too quickly. But if you have that voltage too low, then the opposite happens - the amp sounds too clean or cold. Indeed the common phrases banded around regarding bias and tubes is 'my tubes are running cold' or 'they are running hot'. Randall decided - to extend tube life - to run the tubes cold. So you are saying mesa has got it all wrong? Yes and No. No because the bias settings and tubes seem to work for him as long as you buy their tubes, but YES, if you want the absolute best sound, then usually the tubes need to run 'hotter' in a mesa triple recto. The same tends to hold true for most mesa amps where the bias could be adjusted with a kit.

Personally I think the Road King II, Triple Recto, the Dual Rectifier and all those other great amps sound great just as you bought them. I for one will pay the money and get mesa tubes for lots of reasons, reliability, warranty, I like the sound, etc. You may well decide that it's just not worth all that aggravation to save a few dollars (or British pounds) over a few tubes, the reliability and everything else matters more to you too. And that's my stand on the bias stuff. Randall Smith is not a fool. Neither is Mesa Boogie - if it's good enough for those guys - trust me it's good enough for you.

There's one last area where I really want to discuss misuse of the amp by the guitarist who thinks he knows best; but often he is wrong; as in this case.
You will see on some forums a statement like 'OK fit the EL34's (tubes) but run them in the 6L6 mode'. Firstly in the Road King II (and Road King) you already have both types of tubes in the amp - so much of what is below is useful for other mesa amps but not to a Road King as there is no switch for setting the bias when you change 6L6 to EL34! No doubt someone with knowledge will come out with the mod for that. However in the case of the Road King you can't do this so basically the advice below is for a triple or dual amp.

You will notice on the back of your triple recto or dual recto amplifier that you can in fact fit either 6L6 tubes or EL34 tubes. Now, the bias voltage (from above) is different for each tube type, so Mesa Boogie have a little switch on the back of the amp that changes the bias resistor for the correct one for each tube type as long as they are mesa tubes. So you can change the tubes for the other type. Problem one is like we said above, you MUST use mesa tubes or get tubes specifically set for a mesa tube bias voltage. and problem two is that for other tubes you are back to fitting the bias kit again.

But the real problem is much worse. Those guys who are advising you to 'fit the EL34's (tubes) but run them in the 6L6 mode' are in fact asking you to run your amp specifically as it was not designed to be operated. You will have no warranty, and could cause internal damage to the amp. I strongly suggest that you don't do this with your mesa amp.
Hey, it's your amp and you are entitled to blow it if you want, but really, come on, do you REALLY want to have to spend the money to fix it just because some guy on a forum told you how to abuse the amp? I think not. If you really want to abuse the amp just do the opposite of everything they tell you in the manual!

And when it's all over you can tell the technician Tony sent you. But seriously, don't mess about with things you are not sure of - and if you are sure? Stop telling guys who don't know what they are doing and are not qualified to open up tube amps with 500v DC in there and jeopardizing their life to save $25! Like I said this little perversity is not applicable to the Road King 1 or II but the following is!

Here's a last thought: As you might be able to tell... I HATE to see people get killed. And that's the top and the bottom of this bias voltage stuff inside an amp with completely lethal voltages - oh, and when you get zapped and are lying dead on the ground still clinging on to the circuit - and your little child, girlfriend, mother, brother or sister or anyone else comes and touches you? they will be joining you momentarily. Now maybe you get the picture?