Egnater makes amps that are quality. But these Tourmaster 4100 come from China? has the quality been compromised? and how do these amplifiers sound? 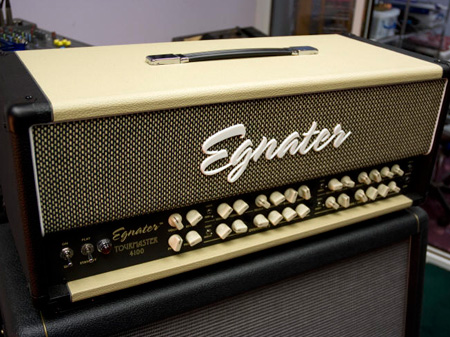 Egnater is a custom amp manufacturer that has been around for some time. Most noted for his 'modules' amps Bruce Egnater also makes the modules used in Randall amps. The Tourmaster 4100H was developed by Bruce for the Guitar Center chain in the USA.

Egnater in the USA is quite well known, but less so here in the UK and Europe. Egnater amps have a tone of their own and it's not surprising since they have been making amps for a very long time - and remind me a little of Engl - good at what they do. One problem though (especially here in the UK) is the cost of Egnater Amps - even in the USA a Genuine Hand Built Egnater head costs big money. And that's where the Tourmaster 4100 came in. Egnater developed a fantastic designed amp that will let you choose the output power for each channel (and there are four of those) so you can go from 10 watts, or 20 watts or 50 watts or 100 watts for a channel - this makes the amp an amazing proposition - imagine having complete and total clean headroom for the clean channel, then dial in some distortion on the rhythm (push down to 50 watts to get that tube overdrive) and then screw the lead channels down even further to say 20 watts for superb tube amp breakup where it really matters... and you have the Tourmaster 4100 head.

But this amp would cost you a small fortune if Bruce Egnater made it in his workshop - and besides, he's too busy making the Modules for Randall Amps these days... and can't be too distracted for hand made custom amps. Here's the secret - Egnater partnered with a Chinese amp maker (who is no pussy when it comes to quality amp making) and so was born the Tourmaster 4100 Head. OK I hear you saying, 'oh not another piece of Chinese s**t' - well, on this occasion I'm afraid you would be very wrong indeed - to the detriment of yourself. Such discrimination is often warranted on far eastern products particularly from China, but rest assured, this amp IS different. Firstly, it's different because if you try and pick it up by yourself, prepare for a hernia - it weighs over 70 Lbs. by itself - partly due to a huge torroidal transformer custom made for this amp - yes that's well over 32 Kilos - in case you ask.. Secondly, the amp housing is really high quality and is made of HEAVY board so there's no surprise that it also adds to the overall weight factor.

However, having gotten the bad bits out of the way, here are the good bits: This amp in the USA costs $1295.00 street price and would probably cost about £1500 UK street price. They are being distributed in the UK but not in any meaningful way. There are FOUR channels all of which are settable for most styles. The output is variable by the channel - I don't know of another amp like this. The one I reviewed was brand new with Ruby tubes installed in the amp - and there are lots - 4xEL34 and 9 yes 9 12AX7 type.... warms the studio up in minutes. The amp also came with a great foot pedal and manual which was very informative.

But what's it sound like I hear you ask. I would describe this amp as being a Jekyll and Hyde sort of amp, you can basically get almost any style of sound out of this amp without really trying. It's a sort of cross between a Marshall, Mesa Recto, obviously Egnater and many others. So it sits really in no mans land. But the feature that beats the lot is the power control. As some readers will know, the Mesa 2:90 also has a power reduction setting for a given channel and that was really useful in achieving the tone from an overdriven tube amp at lower volumes - well the Egnater tops this trick off to a tee - its best feature bar none - and it can make those channels sound awesome.

For me, I have been well and truly spoiled by my other amps, and eventually I sold this amp. Not because it was no good, or unreliable or anything like that - like I said in some ways it is quite unique. My reason for selling it is that for me at least - this amp has a 'no mans land' type of voicing - hard to describe, but I felt that this amp did not do it for me and my style.

I would rate this amp as a 7 out of 10 because of the sound. The build was impeccable and very reliable. Here's what I liked:

Just a note of warning: This amp is EXTREMELY HEAVY. If you have back trouble, or you're just a wimp then don't bother.

There is no video review available for this amplifier.

Some images of the amp under review: 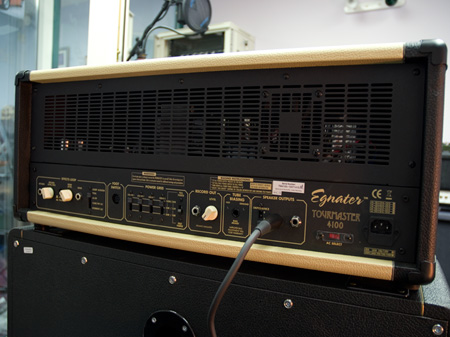 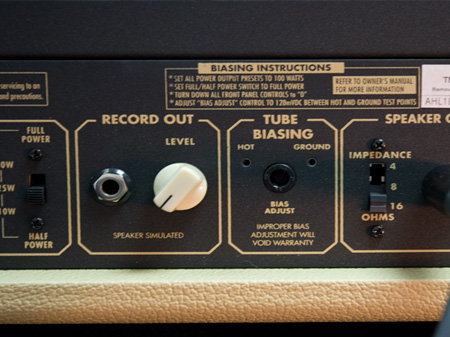