Mesa Boogie aka Randall Smith started out in a small way, in fact in a shed; but he was destined for better things, and like Paul Reed Smith, Carlos Santana got the ball really rocking for Mesa Boogie.

Mesa Boogie is the master of Amplifier and Amp making in the world! What? You don't believe me?

Well if not, you may have a lot to learn so without hesitation read on.

Firstly, the above comments might set your heart racing, especially if you disagree with what I say here (or maybe you are an Axe-FX guy). There's no doubt that guitar amps and makes are a very emotive subject; and sometimes, the difference of a particular brand against another brand is so minuscule (both on build quality and sound) that to tell you the truth, you really can't tell the difference.

There are some out there that are a bit like audiophiles; what do i mean? There's nothing wrong with audiophiles; the guys who can tell you that the mains voltage has changed by 5 volts at 20 paces on their HI Fi Amp. In fact that's an awesome ability. But come on, extend this logic to a guitar amp? To convince someone of that is like saying you climbed mount Everest in your shorts in a day; frankly you are going to be the laughing stock of the guitar world maybe (or are you?). My opinion is that you will be;  now that's out of the way, read on.

It's a bold statement; but bear in mind I have used, played, stripped down and even bought most of the amps out there at one time or another and I still have many of them here; so you could say, that I am capable of such a statement, but do I really mean what I say? When you have Marshall, Engl, Soldano, Egnater, Randall, Bogner, Splawn, Mesa Boogie and you know the names of the rest like I do, they are emblazoned in our memory right? Those amps we all dream about (some more than others) but they are all something to aspire to in our lives; I want a *********; we have all said it.

But when you have that amp that cost you years to save for, and it fails, or just does not sound like you thought then disillusionment sets in and you are all set to lose some money. Surely Mesa Boogie amps are not that good? Are they the worlds premiere amp? Well it all depends what you are trying to do with them, and like many brands each amp has a unique calling card usually for a particular style of playing so the selection of the right amp is paramount in you getting what you want; and that's the same for all amps.

But there is really a few places where amps really are different and I summarize below where they are most variable:

You see, you probably knew that already. If you have ever had a problem with your amp then you will know first hand about some of the above; and indeed your problem could have involved every point in that list; yes, it can be that bad. Now I know some guys will disagree with what I say here, they might have had problems with mesa Boogie in the past, or present, but one thing is most likely to be true; from that list above, go on, be serious, how many of you have had a Mesa Amp that suffers from all those points; stop, let me tell you...  not a single user.

Now, compare that with other amplifier makers. Let's talk Marshall for a while. Here's just one example. The JCM2000 had a socket on the back of the PCB that was for the foot switch. That connector either became loose, cracked on the main board, or just simply stopped working exactly when you wanted it to work the most. The reason was simple; that design failed in the list above on 1, 2, 3, and 4. It's true marshall would fix the amp, but it's also true that if you have a bad design, component or other aspect that's in the amp just waiting to fail, then it will and this is just one example of bad design. Actually I love Marshall. You can I am sure think of thousands of problems you have heard of, some easily and rapidly fixed, others linger on for a while, but if you design, build and make with decent components from tried and tested methods its likely you will make a winner (especially if it sounds right).

In the early 90's Mesa Boogie reinvented itself with the Triaxis Preamp and the 2:90 power amp; they were getting a bit stale before that; the Mark III was long in the tooth. The Triaxis was rapidly followed up by the RECTIFIER tube amps that changed so many things in guitar amplification you could lose count of them all and Randall Smith was right there doing the inventing. How many amps can you name that emulate a rectifier in one way or another? Engl, Randall, Bogner, Splawn, Hughes & Kettner, the list will go on and on; and you will know what I am getting at here; if you invent a winner everyone copies you; in another context think about PRS and the 'single cut'; a Gibson based design and today I am sure that it's hurting Gibson.

But it is a pity in the case of amplifier design. Randall Smith is lucky to have patented the original designs, but other manufacturers will work around the patents. But they don't work around the things in that list above. Usually one thing or another will be missed off that list to reduce cost and so compete with what they are in fact emulating a Mesa Boogie design. And you know what, we all suffer because of that.

Here are the main reasons why I think Mesa Boogie amps are in fact probably the best mass produced amplifier for guitar with a price/performance that others would dearly like to match:

The truth is, like everyone else I have had trouble with Mesa Boogie amps and here's the examples:

I have owned: Mark III, Mark IV, Triaxis, 2:90 Power Amp, Road King Mk I, Two Triple Rectifiers, a Road King Mk II, an Electra Dyne and a Royal Atlantic. The only faults to date are as listed above. In each and every case the problems were resolved fast and at Mesa Boogie's expense. There are of course some things I don't like about Mesa too!

As many readers will know, choices of amps are a personal thing, and some readers will prefer other brands, for sound, feel or a thousand other reasons. One of the most annoying thing about Mesa Boogie in fact here in the UK is the absolutely EXTORTIONATE price we have to pay for those amps; it's exactly the opposite with marshall amps; while over in the USA Marshall are coveted - as Mesa are here. This distorts (in a bad way) the value of the equipment to guitarists in their respective countries. Mesa don't fix that, but it's long overdue that they should.

I noticed that Marshall have just parted ways with Korg in the USA for distribution and are taking on the distribution of Marshall amps themselves; indeed just as they did in the UK all those years ago with Rose Morris. Hopefully the USA will see better pricing now the middle man is out of the way. But the middle man for Mesa Boogie is still here in the UK? Wake up Mesa maybe you would sell many more units if the price was the same as the USA street prices. 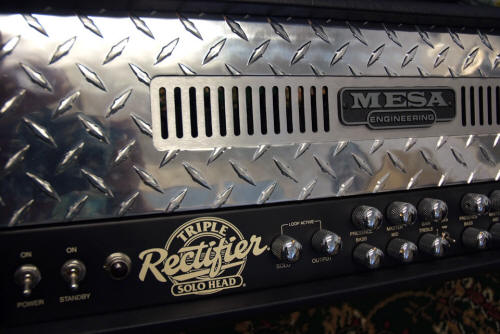 So I am nearing the end of this long page on this website but, you know what, I still think Mesa Boogie remains the premiere world leader in amp design, quality and support even if you do have to pay more here in the UK. I hate Westside (the Mesa Boogie distributor in the UK) and will never buy a UK Mesa amp again because of the ridiculous retail prices these guys sting us all for. It's just cheaper to ship from the USA and use a drop down transformer. I really hope that you guys have a think about what you want from an amp? is it what I say here? or do you have a completely different criteria for your amp choices?

One things for sure the following list may well be the reasons you buy yours; these are why I buy mine:

I'm at the end of some of the reasons why Mesa Boogie rules. My other amps are all cool in different ways and I recommend many of those too; but the favorite amp falls back to Mesa products simply because of the above. Of course, they are not for everyone, and many guys don't like the sounds from Mesa Boogie; but that's a subjective decision; badly designed products, with poor quality and really bad warranty is not. If you disagree with any of this you have the right to and that's no problem either. These views are just from me owning many amplifiers over the years and are directly what I found personally.