The Gibson Les Paul Spotlight Special Custom Shop model was reissued for a very short time and I picked one up. Is this guitar a winner?

This very limited edition Les Paul Spotlight Special is a reissue (well sort of) of the original 1980's now Legendary guitars. This is a custom shop guitar made available in very limited numbers in 2008 only. I believe that Gibson made only just 211 pieces (thanks Leif) of the original 'spotlight special' in the early eighties and with this Custom Shop reissue the numbers are also extremely low - reputed to be less than fifty pieces. Gibson are not telling this time but did on the original. Leif Hoffman checked the 211 quantity out and Gibson did confirm to him that number was made in the early 80's.

This 'reissue' is not actually called the 'spotlight special' either but rather just the 'spotlight' Les Paul; it's just another one of those extraordinary reissues that is not? if you understand where I'm coming from on this guitar. However, its made extremely well and although it is no exact copy of those early specials it does not need to be because this guitar stands on its own quite happily. Here's some blurb on the Spotlight Special from Gibson - but don't waste your time looking on their site for the Spotlight Special - they made (some say) as few as 50 this time - but that's always open to scrutiny, others have said 100 or 200 - I guess no one is telling at Gibson so it's impossible to be sure.

My guess is that it is far less than you think. It's a bit like the Tie Dye Gibson's, some of Tonys other guitars - they only ever made 103 units - and the likelihood of making more of those is zero. 1983 was a year of change for Gibson, when it first began to concentrate on reissuing vintage spec instruments. While we're all vintage-crazy now, this was a fairly new idea then. They knew that to get the necessary attention, they would have to do something special. The Spotlight was the answer.

Using contrasting, figured woods, Gibson's Les Paul Spotlight guitars did indeed cause a lot of players to give them a second look. Gibson now brings back the Spotlight in beautiful flame maple, with all the vintage features you love: C-shaped mahogany set neck and mahogany body, '57 Classic Hum bucker pickups, Grover tuners, gold hardware and a sweet lacquer finish.

Made in 2008 in the Gibson custom shop - we know they did not make many this time no matter what they might say.

Here's some of the features: 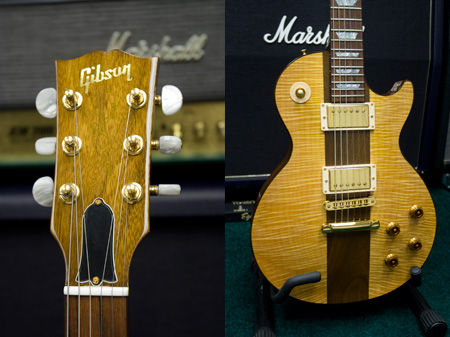