I have always had a problem with dropping guitar picks? These V-Picks claim to solve that problem! But do they? Check out this review to find out.

Dropping a guitar pick when you're in the middle of a great guitar performance is no joke but do the V-Picks solve all of that? 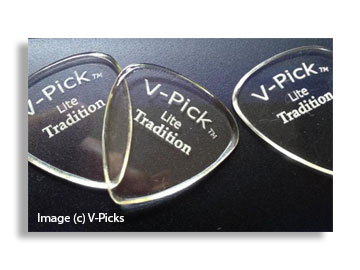 From the first time I picked up a guitar and held a pick or plectrum I have been dropping picks and that's a long time. There really is no cure, because it's my way of playing and holding those pesky guitar picks that cause the problem in the first place. I have tried everything to keep them in my hands. From double sided tape that 'sort of' helps but you lose the 'feel' of the pick, through picks with different engraved surfaces that claim to stop you dropping them and even super glue! Don't try it, just trust me it's not an answer either.

A couple of years back I was walking around a UK guitar show and met someone from madison and fifth (a UK distributor of some gear) who had an intrigueing pick on his stand and they claimed that the V-Pick would be the end of my life of dropping guitar picks. Needless to say it got my attention and especially when I saw the pick, it was a clear and smooth surfaced thing which I probably like you would dismiss immediately as being 'here we go another hyped up product that does not work' category of things.

So I bought a couple and set out to debunk the theory that a V-Pick would stop me from dropping picks as i play. I'm like that - I just hate things that don't do what they say don't you?

Now these picks are not just as simple as they look. At the time I was buying them I did feel a bit 'ripped off' and I have to say rather silly for believing that hype. I've been caught out so many times when something is supposed to have a feature that turns out to be not good or simply does not work. And that smooth finish had me reeling from the outset.

But all things considered I took them home and set out to prove the V-Picks did not work then tell the world in my review. But there was just one small problem in doing that... they really do work!

When you first start to play using a V-Pick it falls out of your hand just as all the others do and then some voodoo or magic (did I say that) starts to work. Over about 10 minutes or so the 'feel' of the pick changes. I would not describe it as sticky, far from it, but the surface (I assume from heat on the material) changes in to something that you just don't drop. It really is amazing to experience especially when it's you doing the review. Heck it worked!

Now one thing is for sure, mark my words, if this pick did not work then I would be telling you right now. I remain amazed at just how good these picks are if you like me drop them all the time. The V-Picks are the fix.

There is also one negative that does bother me and it could prove expensive though. You see these picks are transparent - one reason I used the V-Picks picture above to show them and it is easy to put them down and then you can't find them! That honestly is the only sort of negative that I could level at these picks and they get a resounding 'go get some' from me for anyone who drops picks - so that's all of us right?