The Marshall 2555X also known as the silver jubilee is legendary among Marshall guitar amplifiers. Originally from 1987 but reissued in 2015 and made in the UK. How does this reissue compare to the original? and is it worth buying? 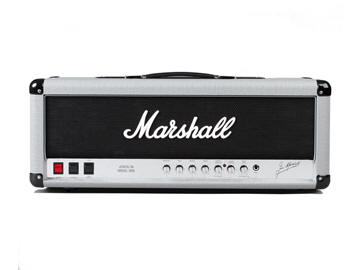 A number of months ago I picked up this 2555X under review from a local dealer who still had this one in stock - basically brand new and only from display. Why did I buy it? Well the fact is that when the originals came out back in 1987 (for just one year) I was using a number of amps and I let the Silver Jubilee slip through my fingers at the time. Back in the day they were available for just one year only and after that apart from a couple of small numbers (one was the 'Slash' 2555 which I also missed) never appeared on the scene again.

But later, the Silver Jubilee had been gaining a reputation for itself along the lines of 'this is what the JCM800 should have been' and that sort of thing... so guys started to value the originals more and more - indeed very much like the YJM100 is also doing these days. The fact is, that the 2555 head sounded pretty awesome. So then the more famous players out there started to use this head in vengeance - people like Joe Bonamassa and Joe Satriani and many more. So everyone wants one!

And there really is good reason to buy one... that is, if you want to spend a load of money on an old amp? We all know the score, while the amp is great, old tube amps are often unreliable. If I did not know better I could be justifying a pile of aggravation right?

Actually, sooner or later Marshall Amplification from Milton Keynes in the UK would spot this trend and they did. Welcome the 2555X reissue silver jubilee head guitar amp for the masses with great reliability, incredible reliability and a decent price (at least in the UK). And for all intents and purposes this amp offers what the original did except for a few tiny changes here and there cosmetically mainly but with a few changes to meet the various approvals that amplifiers have to meet these days.

But there's one thing that they did not change - that sound! And I can confirm that the sound of the 2555X really is as good as those rare originals from back in 1987. Although sound really is subjective and some guys might disagree there will always be some guitar players that would argue the original is better for whatever reason.

The 2555X is a two channel amplifier of 100 watts output (or 50 if switched from the front panel), with the same 'silver' vinyl (or tolex) of the original - and that 'silver' face plate that the original 2555 had.

The amp under my inside and out review here has a pretty unique serial number too - it's amp number 1! While there is more to it of course than that brash statement (read the review for more on the serial number) this amplifier is still a pretty cool piece of guitar amp for sure.

This Marshall 2555X Silver Jubilee head review inside and out will be along presently.

This review is being written currently and will be a really in depth review which I am noted for.

Until the full written review is here, here's the video review I completed.

Please check the news page for updated reviews as they are completed.