Everglades Audio is a small company that has developed a Midi control program for the Kemper amplifier. Awesome graphics make this low cost tool to be on the right track from the outset. But how good is it?

You might not have heard of Everglades Audio before. But I'm sure that if you go back in time a little there are many companies out there that started from small acorns and now dominate the area of music industry they are now known for worldwide. Everglades Audio is just one of those small companies that just might develop something FIRST that is actually great for what it's made for - The KPA Midi Control Program; so that opportunity to grow for Kerman (the developer) is there right now if he works hard. Who knows, he may even develop a whole series of similar programs for different devices.

The Kemper amp (if you don't know it check the review Review-HERE I wrote a while ago) is a new technology device that can somehow almost 'suck' the tones from other amplifiers and then use those tones to effectively replicate those tones from the Kemper amp.. a great idea backed up by German ingenuity and great engineering. And the Kemper amp has THOUSANDS od what they call 'profiles' and settings. Indeed if there could be any criticism (you would have to be very picky) that might be that the KPA could be a little unwieldy with all those settings and turning knobs to enter profile names and user settings continually.

Step in Everglades Audio Kerman Rodríguez and his Kemper Midi Program - and some may say not a moment too soon while some other users are happy to twiddle knobs all day. Of course ANYTHING that makes a piece of technology easier to use must be applauded and Kerman seems to be doing a great job.

Here's a screen shot of the application: 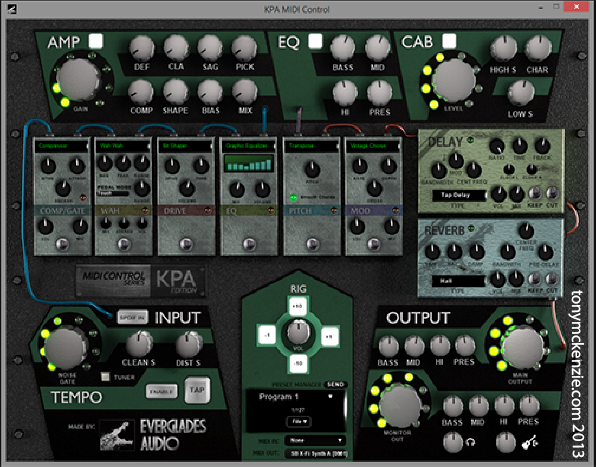 As you can see from the above screen shot taken from my PC the software application presents itself in a very nice way; it's not the same as the Kemper layout (Mr. Kemper might not have been happy if it was) but rather an alternative enhancement that is a better graphic representation of the KPA than what could ever be achieved on the real hardware. But of course you can do that in the world of computers right? Its really great to see those floor pedals with their little connecting wires and the view gives you a better 'feel' of what's going on inside the KPA - far easier to visualize than from the KPA without this software.

The version I have is a 'pre release Alpha program'; what that means is that it is in the early stages of testing and some things are not yet implemented as is often the case with software. Even the KPA itself took over a year to implement the long awaited 'Performance mode' which thankfully Mr. Kemper released to all the users of the KPA in the form of an update.

The limitation on the version I have tried is that for now the Kemper Midi Program from Everglades Audio is only a 'one way' midi control; but that does not mean that it can't be useful in some way. Indeed with this program you CAN actually change settings on the Kemper KPA amp but you have to press the odd button here and there to (for example) save the settings you just changed; and that's no big deal. I can't wait until the full midi implementation is applied by Everglades Audio as this program will be a nice feature to have around and make things a little easier sometimes.

I have used a Kemper Profiling Amp Amplifier (or KPA) since very early January 2013 and am I guess one of the early users of the unit; there is no doubt that the KPA IS probably the world leader in this 'profiling' technology and stands completely uniquely in that area. I moved on from the original 'nerd's handbag' (as some might call it), up to the rack version earlier in 2013. But the rack version does not have those nice lights around all the knobs (some might say that's a good thing) that I really liked on the earlier stand alone version.

That makes me think that Everglades Audio and this program could develop TWO modes - one for the original unit and one for the rack version; and because its a computer representation then maybe Kerman will add those missing leds to the program for the rack unit. Its little things like those enhancements that can really help. To see this current version running Everglades Audio made a short video Everglades-Video-HERE that runs through some of the main features of this application.

First Time Users of the Kemper

When I look at products like the Everglades Audio Kemper KPA Midi Program I ALWAYS think about first time users - not of this software, but of the amplifier itself. The KPA has changed dramatically through its operating system and features since launch and has continually added those enhancements and that's a fantastic thing because they are free if you own a Kemper amp. But first time users can get confused over where a particular feature is in the Kemper menu structure - and that could put some people off using it. The Everglades Audio KPA Midi program can actually help reduce the confusion and presents the KPA in a simpler way than trying to get your head around the KPA as a new user in my opinion, but it does need further work to get it where it needs to be.

I made a suggestion a short while ago on the Kemper forum about having a 'menu tree' for example in the documentation because a new user (from my experience with guys who have used my Kemper amp) tends to forget where things are especially in those early days. It's a small thing (some might say) but if you ARE a first time user then confusion could lead to selling the amp. It's just another area that I'm sure Kerman at Everglades Audio might consider adding to his program because the more SIMPLE features in there the more guys will buy his program I'm sure. As you might guess, I do think that Everglades Audio has a great opportunity to develop a de-facto computer midi editor, but I also think that others will be developing similar solutions (maybe even Kemper themselves) and if that happens then this program from Everglades would not be as popular.

Everglades Audio is also working on a Tag Editor (online) and librarian type of program that to be honest there IS a need for those sort of programs and I hope that Kerman gets there soon with that project too; check out Everglades Audio.

The Everglades Audio Kemper KPA Midi Program is a great step in the right direction and if the program was complete I can see myself using it probably with many other guys. Like I said, I have the rack version and the program does work with the rack version and the standard kemper amp no problem as far as implemented at the time of writing. Just the remainder of the midi I/O to do and some tweaking to get the program size down and this will be good to go. I always think of first time users as I have said, and that's an area where effectively Kerman and Everglades Audio could feasibly sell one of his programs to every new user... now that's a lot of programs!

I would like to see some of those other ideas in the program because often its the simpler things that make life easier that catch on sometimes in a big way. I'll be updating this review when the program is complete so stay tuned. I purchased this product as a regular user and have absolutely no association with Everglades audio other than buying this program from them.

I'll reserve the score on this program until it is complete so that the scoring reflects the program in the finished form as supplied to regular users.

Well I never did go back to the Everglades Audio application even though the guy really did work on it for some time. Indeed he may still be on it so do check it out. The fact is, that here we are in August 2015 as I write and there is still no decent librarian for the Kemper amp. To me, it's not guys like Everglades that need to stand up to the plate, but rather Kemper. It is true that they have enhanced the Kemper product beyond anything that you might have thought of back in January 2013 when I bought it (or was it 2012?) but that missing librarian is surely one of it's biggest let downs in my opinion. There is so much potential its unreal, but it has not quite happened yet.

Good luck to everglades for this software and I sincerely hope he moves it much further forward and hey come on Kemper users need a librarian editor in the way most other stuff is today... a decent graphical interface that does it all on a PC.