Ah the good old Axe-FX II. Find out why I'll NEVER keep one and why the one I had for review is sold; you might be very surprised at the logic. But if you are an ordinary guy just like me you may well not be surprised by the arrogance of some makers out there.

Axe-FX II why I would not entertain keeping one at ANY price.

I bought an Axe-FX II from the European distributor G66. A great company I might add.

I reviewed the unit and the MFC-101 on YouTube and the second I did I was ridiculed to an alarming extent on the fractal audio forum that is managed by the owner/designer of the company. Indeed they used racist words, ageism was rife, extremely derogatory remarks about me and lastly how I play guitar (which was never under review). Remember it was the Axe-FX II was under review not me!

I'm not a complete idiot when it comes down to playing guitar (I have some really great reviews of my albums I wrote and played without a single simulator in sight) and have had at least two tracks within the top 20 on N1M charts for instrumental rock but on equipment reviews I don't always play very well or always get it right, of that there is no doubt. But if the equipment is being reviewed then frankly the playing is another story; its the gear that I have to focus on.

When it comes down to saying racist remarks, expressing rife ageism and that other stuff (which I will not put on this site because I get lots of people visiting whom I don't feel should be subject to that abuse) on that forum I do not accept that sort of thing. Maybe its 'OK' for the OWNER of that company to condone that sort of thing but where I come from its simply bad business practice. A decent CEO with thought for his company would resolve that issue on that forum immediately whereas the other type like the one on there is happy to allow it all. Often you find that what are basically 'engineers' have little business acumen when it comes down to managing a company. Indeed I've seen it before.

Remember I'm probably just like you, I pick up a guitar and play because I like to. And I write reviews because I was sick and tired of seeing reviews that one way or another did not reflect the products that I bought; and there are many that write reviews that are often not a true reflection of the equipment in question. It costs me dearly to buy the gear and to spend untold hours writing about what I find so other musicians can benefit in some way from my experience. Indeed this very website has been continually developed since the 90's.

Unfortunately, even the owner was calling me things he should not have done and that's just not right (see below).

After all I was a paying customer...

So maybe it could happen to you!

And that's where I have issues with that company. The forum says welcome and the chimps on there say everything else you could think of; all because I wrote a review that they don't agree with? Reasons why? Well go and figure that one out yourself, but I guess that if you show some things that are irrefutable then they are worried that maybe someone has 'blown' the lid off rubbish.

But as a customer I have been treated like crap. And for a product that is equivalent to $3500 or £2500 in the UK that stinks. Remember (as I have been told by many other guys that have suffered with that company) that it could be you!

Actually I did like some the product (the box was exciting to open), but I did not like:

I gave the Axe-FX II a reasonable score for what I found when I reviewed that unit. Unfortunately because of those racist comments that were posted and the customer service (remember I'm a customer paying full price) I downgraded the product a little to reflect that the forum where you have to go to get support (I would not go there) and other stuff I have learned since from many other customers that have told me their stories. Strangely enough many reflect the experiences that I had. I have them all on file.

I would personally never buy another one of these as long as I live, well at least until I review some new gear they make sometime. I think tube amps eat it for breakfast. Tube amps may be better than the Kemper too, but at least the owner won't call you a 'chucklehead'. It's actually comical the more I think about it. How can an owner of the company call customers that - its ridiculous.

Its that simple really. If you are a PAYING customer of any company, and you are treated extremely badly then sell the gear and walk away; but don't forget to tell your friends how you were treated. I do. Because I don't want other people being called a chucklehead by the company owner or worse getting racist remarks banded about them. Awful.

He clearly does not come from sales and maybe does not want his company to succeed who knows? Calling customers names in this way is bad news for that company. Shhh don't tell him with some luck he may fade away. 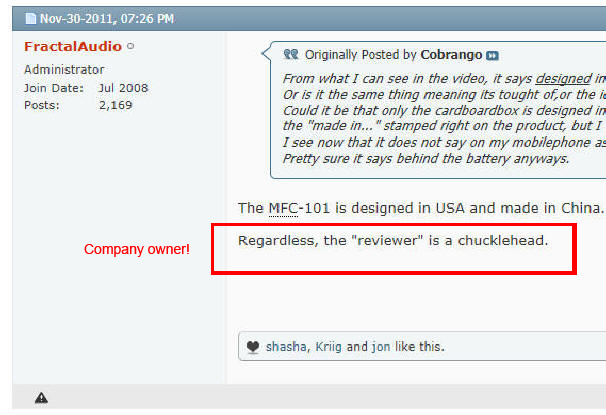 At one stage I thought it was just me... but alas not. Read Here: https://www.gearslutz.com/board/so-many-guitars-so-little-time/623142-two-notes-torpedo-axe-fx-ii.html as these guys also have suffered in many ways not least that appalling attitude when you need support.

There are many others who have suffered in one way or another by rude arrogant people either owning the company, employed by the company or allegedly being upgraded continually with free equipment - hence the aggressive nature on the support forum. Well fancy that!

Don't look for the review because it will never happen on this site (or maybe it will) but please do draw your own conclusions about the equipment and the guy who runs that show not to mention the appalling forum which is the ONLY place to go for help. The 'www.fractalaudio.co.uk' website I closed too. However, you might like to know that I was threatened by 'Fractal Audio' because they said that 'Fractal Audio' was their trade mark. Unfortunately for them, I checked this out on the government trade mark registers worldwide before 'giving' that website to Fractal Audio and you know what? They DO NOT OWN 'Fractal Audio' as a trade mark and never have. They claim other trade marks in the manual for the Axe-FX III too which I checked and guess what... Deja-Vu they don't own those either.

So I told them that they had no right to the domain, which is still in my ownership to this day. I will not buckle from what is actually a bare faced lie. RIP 'Fractal'. I guess what goes around comes around.