You have just got to see this - an awful abomination of a Chinese guitar that no one would buy...

When a friend of mine brought this round and said he had a JEM 7VWH (like my real one) I wanted to take a look what had changed and listen to the sounds etc. But when he said it had cost less than £200 including shipping from China I was shocked - can they REALLY make one of these and ship it half way round the world for the price of a gallon of gas? (petrol where I come from). Well actually this guitar did look the part on first sight and I wondered that maybe all the money I spent on my original Ibanez 7VWH was wasted - perhaps fit some pickups to this guitar, a few adjustments and there you have saved $1500 or at least £1000 pounds. But is it too good to be true?

When this guitar arrived, I wanted to get the first go of it to get my views about the whole china syndrome of guitars so i could get this relayed to the guys most vulnerable and the ones who could least afford to buy a dog - i.e. the newbie's or the guys without a lot of spare cash. I'm really glad I did check it out carefully - it was absolute S**t - and that is being very generous. Where do I start - well, when I tried to connect a cable is a good start - on the genuine one, you simply plug in a cable and off you go. Not so on this cheap copy - in fact, with the guitar on a guitar strap (a good place) you CANNOT fit the guitar cable - it fouls on the strap. So if you only ever sit down without a strap that is good for you, unfortunately the other 99 zillion guys don't do that - so it's time for the drill - to drill out the cable entrance properly in the right place... oops - you can't drill? No problem - send it back! So I sat down on the chair and got the cable installed. I really did want to test this.

The next hurdle (before actually getting a sound) was the cheese grater action that this guitar already came fitted up to - awesome if you are a chef :-) and not quite so good if you have carrot fingers :-). Yep - another bad point with the guitar. So being a kind type of guy that I am, I set about changing the strings (rope) for some decent strings and to make a few adjustments to the action of the thing. After all, it DID have the vine inlays. This proved a little harder than expected. The reason being that the Trem unit (looked like the real one but was not) was fitted so that you could not take the action lower no matter what you did. I played with it for 30 mins to get the strings back on. The strings were great, the action NOT. I never improved the action no matter what I did be cause the 'Floyd' was not a Floyd and it was fitted incorrectly from the factory.

But I wanted more. I thought, ok, some guys LIKE a high action (I'm not sure about the 1/4 inch) so I proceeded to sit down again and get that damn cable in the socket no matter what.
Amp on, cable in, stand back... it looks cool, the sound was not good. Think of an old Kay guitar from the now defunct 'Woolworths' in the UK or Kmart in the USA and you have in fact thought of a better sound! The sound was awful, it was not just the howling, the intonation, the hum (yes hum) it was EVERYTHING. There was a good thing on this guitar - and you have seen it at the top of the page - that's right - the logo - it looked near enough right. But that's probably the reason for buying it in the first place. Listen to some VERY good advice - if you want an Ibanez (which if you buy this you would not be getting) then go and buy an Ibanez - even the cheap ones are way better than this is. I cannot believe that someone would turn out such a guitar for sale - if it was $50 it would be too much for this thing.

Actually there were no good points on this guitar so I'll list the bad ones:

But there is ONE good point.

There is absolutely no forum members! Want a link to the site: there isn't one!

Actually these days there might indeed be forum members! at least on YouTube there is; and the scary bit is that they sometimes try and justify rubbish like this as being 'OK' for the mioney! I know, it IS hard to believe but I have spoken with a number of guys that seem to want this sort of guitar being common place - that's the only reason they will actually buy one - it 'looks' good wherever they saw it and now they want to support the counterfeiters so you can have one too!

I'll pass on that. 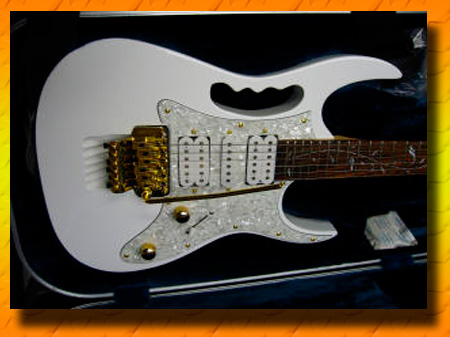 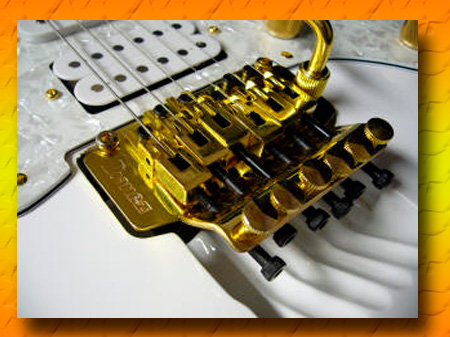 Its a little high on the action! and why is it made from tin foil? 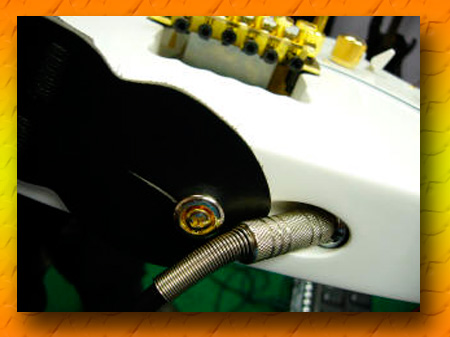 Maybe if I drill another hole... 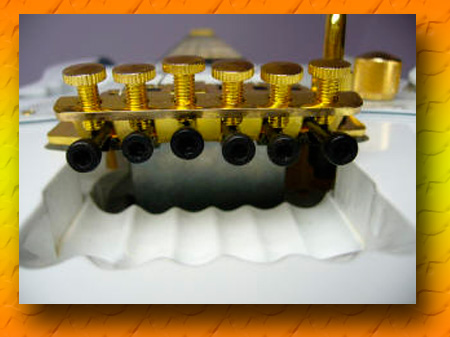 Now that's what I call a nice low action right? 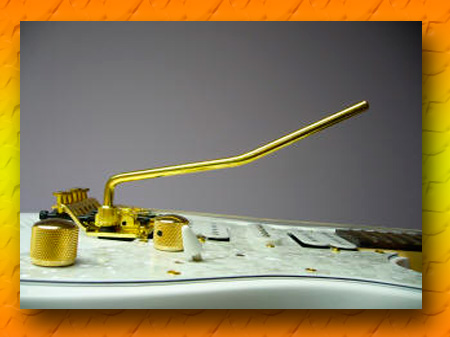 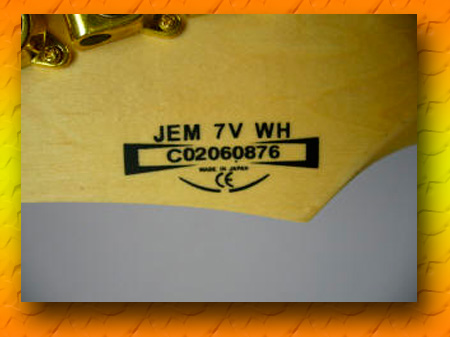 Was that guitar really from Japan 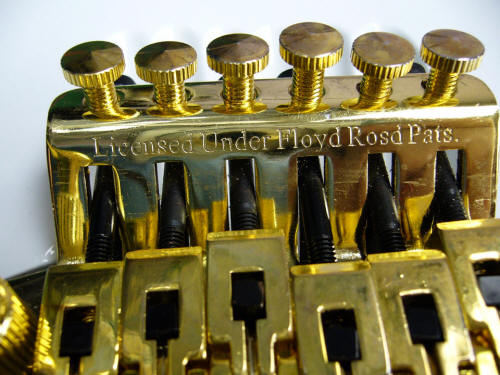 Is it really a Floyd Rose Tremolo? I don't think so.

And the headstock looks 'OK' So you bought a headstock?

Don't support counterfeiters - their money could go to support drugs etc. and your guitar could well arrive like this.