Mesa Boogie Royal Atlantic Amplifier RA100 Inside and Out Review

Does Mesa Boogie's Royal Atlantic RA100 amplifier offer something that other amps don't? is this the tone monster amp Mesa promised? and what about volume levels? Using an attenuator on each channel this might be the answer?

Mesa Boogie Royal Atlantic 100 Watt Amplifier Inside and Out Review 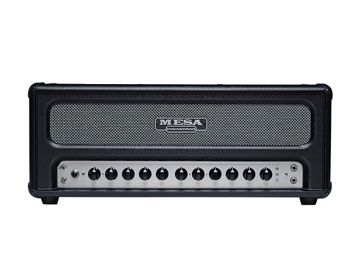 The Mesa Boogie Royal Atlantic has been or is presently to be deceased and no longer for sale. There are a few out there from what I see mainly leftover stock form dealers and that sort of thing. You really don't see many for sale privately which begs the question of how many of these amplifiers Mesa Boogie actually sold. It seems not enough to continue the manufacturing of them.

Well what's so weird about these amps? The Royal Atlantic 100 watt amp offers some very nice features never found on any other amp that I have seen. For example, each channel has its own attenuator that is variable so you can set up any channel to any volume, or more importantly, you can drive any channel very hard, but still retain the balance between those channels. That means that you could run the lead channel flat out at a level where you can literally talk over it! Linking this in to what looks like a regular amp is a revelation.

The Royal Atlantic 100 sets out to sound like a Fender on the clean channel, and like a Marshall on the crunch and lead channels and to a large extent it does achieve that.

I see the RA as a 'stage two' Electra Dyne. The design is firmly based on the earlier ElectraDyne amp internally, but has been expanded to remove some of what turned out to be difficult design techniques that affected the Electra Dyne's operation and function in reality. This amp resolved those issues and maybe this should have really been the Electra Dyne and another innovation should have been the Royal Atlantic. Unfortunately that did not happen and this amp is now defunct, it seems that Mesa Boogie won't be making any more.

None of this means that the Royal Atlantic is a bad amp, far from it. Indeed it makes this amp a very powerful amp that loads of guitarists have never had the benefit of trying and that's a pity. By using the features on this amp you could effectively change the way you sound in a good way. When did you last crank up the Marshall to ear shattering volumes to get 'that' Marshall tone? Now you don't have to; it's entirely possible at the flick of a switch to get that tone and talk over it as I have already stated with this amp.

This amp you need to know is a very heavy tube amp head; indeed, I actually caused a problem with my back just picking this one up! if you have ANY back issues you either need a roadie, your girlfriend, or the wife, to pick it up for you; that way YOU are safe but shame about them and their bad back. Oh well, things like that do happen.

This amp like the ElectraDyne can use EL34 or 6L6 tubes as there is a switch on the back of the amp to change over the tube type. And those tubes do have an effect on the overall tones too; think Fender 6L6 or Marshall EL34 tones and you won't be far out. But the Royal Atlantic deserves to be considered as an amp choice because in reality, this amp is really good, even with the weight and other baggage that I will cover in the inside and out review below.

The amplifier under review I bought from someone with a small fault that I later fixed quite easily. It was not far from new, but because I can't get warranty and it was end of line etc. I bought it very cheaply. It's also a 110/120 volt amp that maybe I'll convert sometime if I get around to it, so watch this space for that as I've seen no one else doing that sort of thing to these amps. If I can do it so can you if you can solder and take some care.

The review for this page is currently being written so check the news page for the latest on any review update.

Here is the inside and out video review I developed for my YouTube channel: