This is a review of a Warmoth Stratocaster licensed replacement body for a Fender guitar made of Swamp ash and Quilt maple natural finish. Are these things worth bothering with?

Some time ago I learned of a company in the good old USA who makes Fender licensed parts for Stratocasters. The Fender stratocaster is really a little like a car - just for upgrade all you need to do really is buy the part then fit it. But is it REALLY that simple? I recently bought a stratocaster body from Warmoth in the USA (around 2010) and proceeded to rebuild a stratocaster I had. 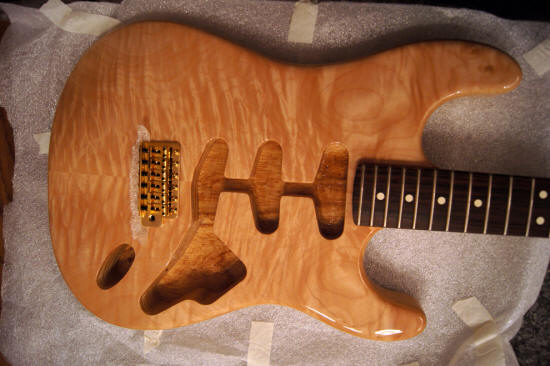 Maybe your idea of a stratocaster body is different than mine... maple on a stratocaster... really? Many guys will baulk at this body and say things like 'you can't get the sound with a maple cap' or maybe 'that design is different it can't sound the same as the real deal' or something similar. Maybe you are saying it to yourself right now! Don't worry... I'm not going to be judgmental of you - now leave.. no I'm only joking :-)

But one man's heaven is another man's hell... right? So choice is important so that you can get exactly what you want - not someone else's heaven, but a little piece of your own. And boy does Warmoth have choice.

Was this REALLY off the shelf at Warmoth?

Yep, I went to the Warmoth site just as you might, I scanned the prebuilt bodies which were finished but could not pin one down that I liked so I went to the unfinished section and found this. Because I am actually building two Warmoth body based guitars this one had to be the cheaper one (more of that on other pages of this site) so I had it clear coated front and back. Total cost for this body was $480 or so. The TAX here in the UK when it landed cost £73.50 on the top. Still, the government needs some more money for what I know not except to shore up those greedy banks we all seem to have.

In any case there were a few options on there such as the slimmed down neck joint so I thought this body was a reasonably good deal. It's not a Mexican job from you know who! So I paid my money (just like you guys) and ordered it on the 30th March 2011. It arrived about three weeks later, which in my opinion is not too bad bearing in mind that the thing needs to dry after it's clear coat and then there's the shipping. 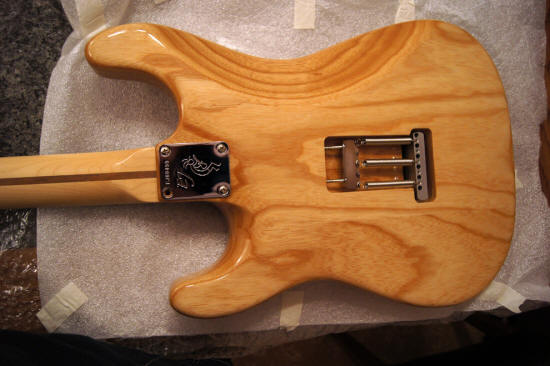 Was it wrapped well?

Sure was... it came in a nice strong brown air mail box and we very well wrapped inside. I ordered a scratch plate at the same time and Warmoth did not charge me shipping on the scratch plate either (more about that later).

What was the Spec of this?

The specification of this Warmoth replacement licensed body is quilted maple on the top, swamp ash on the back, contoured neck joint area and extended cutaway. Everything else was either my choice or was there before I bought the body. I then 'chose' clear lacquer as a finish to 'show off' the wood on the top. 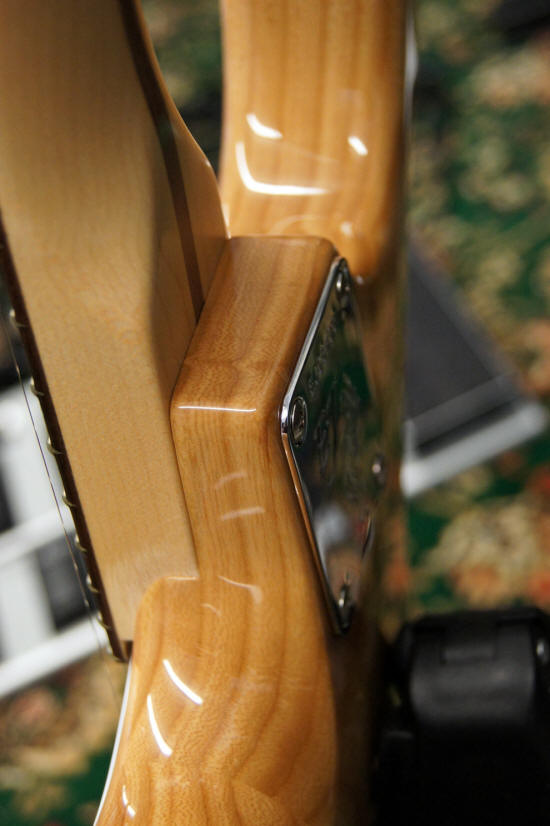 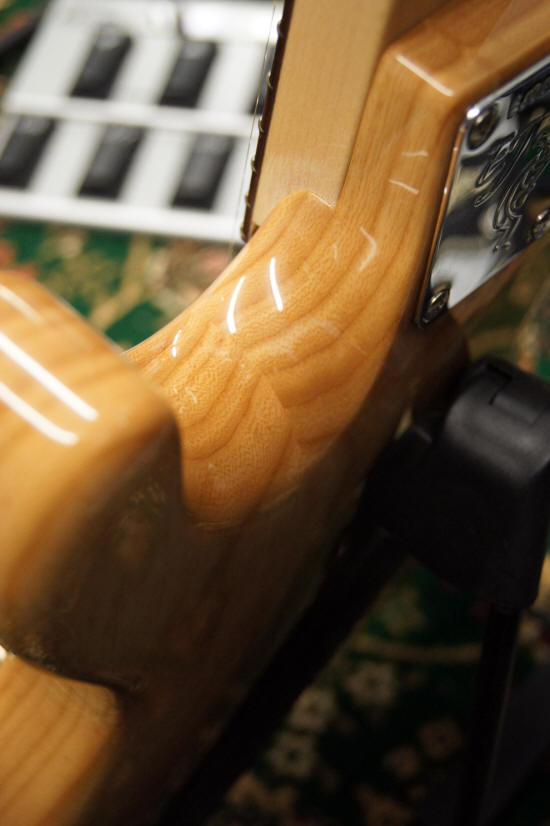 What else needed doing to fit this Warmoth body?

Basically nothing. Just buy the body, have some idea what you are doing and turn your stratocaster in to the thing it should have been from new but maybe you could not afford it from Fender (don't worry - it's likely Fender never made one like this so nothing lost).

Is this thing any good?

You bet it is. This is the third body I have bought from Warmoth over some time and each and every one of them has been of the highest quality. Those guys at Warmoth don't seem to skimp things anywhere so the quality is as good as you can buy really. The weight was an awesome 3.2 lbs.! But it carries a price tag too... and that's the ONLY place where you could talk dirty about this supplier - their kit is NOT cheap. But they do cater for the specialist guy who often knows what he wants and will get it no matter what the cost so you can't really be too hard on Warmoth - they just meet a demand for quality products.

What about that shipping you mentioned?

When I bought this body I also ordered a scratch plate a couple of days later. I just took my time choosing what would best suit this stratocaster when it was finished. The pick guard (some call them scratch plate) was around $25.00 which was really good for a custom guard. But the shipping?

Believe it or not they wanted over $28 (or thereabouts) just to ship a pick guard - in fact the shipping was near enough the cost of the item! I have bought pick guards from all over the world - and Warmoth has the highest shipping of ANY company I can find for a simple pick guard. They want to send it EXPRESS air mail... but I don't need it that quickly (nice if you do) but that price... no thanks... that was awful. So awful that I sent an email and asked them if they could ship the pick guard with the body so there would be no shipping coat for it.

Warmoth agreed... And so they should. It's not often I take something to heart like that, but really, those shipping costs (with no option anywhere on the site) takes the p*ss. 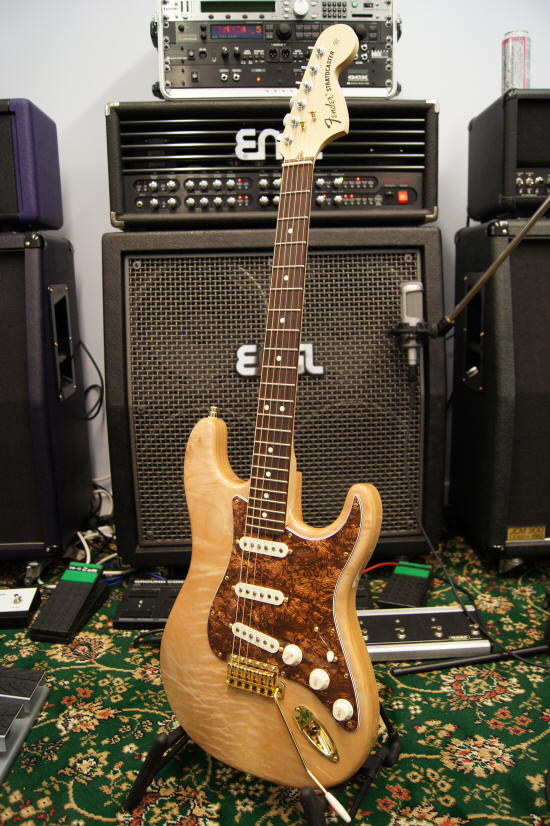 The finished Warmoth body on the Stratocaster - click for larger image

Overall I get a good feeling about some of the Warmoth stuff - especially the bodies. But I have bought necks from Warmoth in the past and they simply don't impress me in the way that they should. In fact the Fender necks are in my opinion far superior. Maybe NOT the Mex ones but everything has a price. Although Warmoth offer some unique options on necks - ultimately it's the 'feel' of the neck that's really important and the Fender ones feel just that much better if a little bit more pricy in some circumstances.

My experiences of the necks is that while the neck looks good, those fret ends have a lot to be desired while the Fender ones are great. But those bodies - they are first rate - assuming they get your specs right - see my other review for that story.

I rate this body as about an 8 out of 10. This was the best top for an average price. In fact of the bodies I saw other than making a custom one (at 40% more) this was as good as the others on there. Looks good - and sounds good too. So if you are looking to upgrade that tired old stratocaster (maybe even sell the old body to help finance the new one like I did) then Warmoth IS a company to consider carefully among your list of suppliers. While I have seen other stuff out there I have not yet found anyone 'better' in the supply of top end stratocaster bodies.

Recommended for this one... we shall see on the next body to arrive (that one cost $1000 near enough - it had better be good). Note - the 'Blue' body quality was good, but other issues were evident - read the review HERE for more info.

Here's a link to their site www.warmoth.com