My First Fender Custom Telecaster Build - a Review of the how's and why's of what I did. 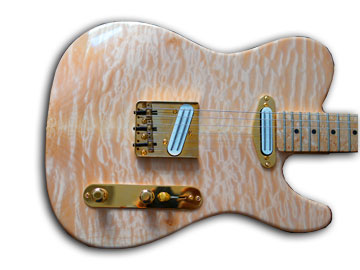 This Telecaster guitar was made in 2013. I later sold this one because of certain design issues that I did not like on the original Leo Fender design. It was sold to a very famous guitarist who is really an awesome player (he's featured many times in Guitar World etc.) and he can be seen playing this one all over the internet.  The second Telecaster 'improved' some of the features that this guitar I did not like later after playing it for a while. There is no doubt that Leo was a master of guitar, but things have really changed since the early 50's and so has the needs of most guitarists.

This first version was an awesome guitar as you will see when Glenn Proudfoot plays it, but for me my second guitar is better for me.. lord knows Glenn is one awesome player and I am very proud to see such a great guitarist play a guitar that I built.

The Fender Telecaster has a place in modern music for sure. It's seen in many styles, but this guitar helps it to be better than the regular stuff and in my opinion makes this guitar one of the finest Telecasters you could buy from anywhere.

This review is being written as you read this page so check the news page for updates.

I later sold this guitar to Glenn Proudfoot, who is seen here demonstrating his amazing technique: