AFD100 Marshall 'Slash' Amp in use

The AFD100 Marshall amp Appetite  amplifier is a simple amp, or is it? Those few switches are deceiving? And what about the speaker cab? Anything will do? I don't think so. Find out what works and what does not.

Marshall AFD100 'Appetite' Slash Amp in use in the real world

I guess it's simple really, get the amp out of the box! 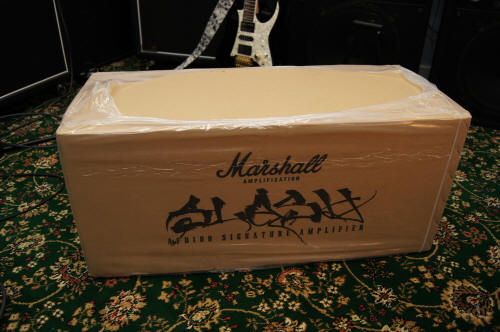 Plug it in... and hey presto instant rock n roll.

Unfortunately that's not usually the way it is in rock n roll land.

You know the score - not much ever goes to plan. Maybe you don't have the right lead from the amp to the speaker - probably not the case because Marshall in their wisdom include one. Well that's better than you just grabbing any old lead (in particular a guitar lead) and just plugging it in to the amp and the cab.

Bang.. and it's not even warranty.

OK so I'm a little over zealous with the scenario but really simple things like that can and often do take out a perfectly good piece of kit. It would be bad if it was yours and even worse if you just unboxed it from those nice guys at marshall and that's what happened. OUCH.

So remember - no guitar leads for the speaker connector. You can use that cheap lead that comes with the amp - or buy one of those decent ones made for the job. Decide on a good lead for the speaker connector by ensuring its NOT screened or twisted wires and secondly make sure its a big fat one. There is high power going over that cable and you need one up to the job - remember failure of this will cost you the amp - probably.

It's easy to just throw anything on your amp. If you're a Slash follower you will know he uses an old beat up cab that sounds really great to his ears - why bother - just buy a new one?

Well actually old Slash is not as dumb as he looks (no offense intended) because his cab is to some extent his sound. Now you would not want Slash sounding like the man in U2 would you? Of course not.

Think of it like this - that speaker cab is part of the amp. If you use a different cab, you have a different sound. You have probably noticed that I am harping on a little about this right? I am - and if that's what it takes to get you to understand that the amp is ONLY HALF THE STORY then that's ok by me.

Check the internet and you will find out exactly what Slash uses for his speakers and if you are a Slash fanatic - or just want to be Slash, or... well you get the idea - then copy him completely. You will still not sound like Slash, but a sort of brother to him if you can play those songs.

Needless to say - different cabs are a choice you will make.

I usually go with tried and tested cabs dependent on the amp. For example, I would not really use a Vintage Modern cab with an Engl E670. The speakers are far too flabby for that.

But maybe I would use a Vintage Modern cab for the AFD amp. It was designed with a particular tones in mind and they are reminiscent of the AFD which was designed to be like those older amps in sound.

My actual choice was a 1960B 4x12 cab and my choice of that cab was that it uses the Celestion G12H 75 watt speakers that I really like the tone of. I find the reissue cabs and the hand wired cabs far to flabby in the cones for my use. But that does not mean that you can't use those cabs - it just means I don't.

So take your time in choice of speaker cab and choose wisely - remember how toppy the AFD Appetite amp can be - I reported that in my review and Guitarist magazine also picked that up too. Choose wisely. 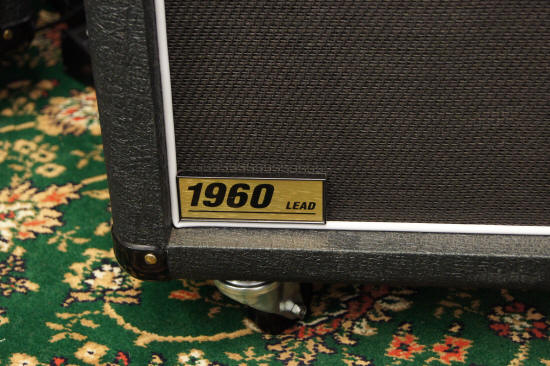 I play rock. This amp is built for rock. It's a good choice for me. It may not be for you.

If you want to play some nice clean guitar for some of your ballads then get out of here! The Appetite amp is not really for you. The choice of amp is important to your style (no I don't mean whether you have a gold medallion on or furry dice in the car).

But just so you know this amp is not really for that style I said it here.

Only buy it if you play rock.

I did say in the review that I normally used a Fulltone Clyde Wah pedal and that it was not 'suited' to this amp.

When I tried using that pedal the sound was not good. It was almost like the amp could not hack the extra input power from the pedal. Remember that the Fulltone pedal, as well as being a great wah, also has a preamp built right in there. It's true that you can turn that down, but even with it backed off the amp sounded bad - in a bad sort of way :-(

My guess is that this amp is pushed quite far down the road of being driven by it's own preamp and it's just not too happy in being pushed over the cliff. Actually I was surprised by this result from this amp.

I strongly suggest that (where possible) when you are buying a new pedal that you try it out ON THIS AMP before you are committed to buy - ask the dealer if you can return it if it just does not sound right to you. That way, there's always a get out so you are not stuck with something that sounds bad to you.

That applies to anything really, but just check the pedal you want to buy. 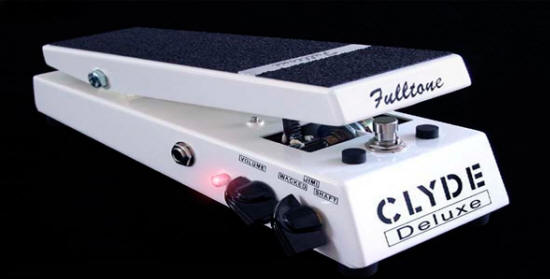 The Cry Baby was perfect. 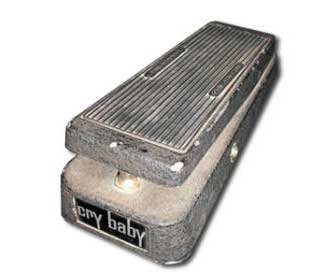 Note that this is an ORIGINAL Cry Baby pedal from the end of the 60's. Its likely that you can make the other incarnations work OK but if you get a chance try before buy!

One of the things I found out right away was that with the Ibanez (and the Vai pickups) and the Gibson Les Pauls I tried they all drove the front of the amp in a really good way.

If you use a Fender Stratocaster or any of those other guitars with 'light hearted' pickups (you know what I mean) then maybe the sound will not be quite as intense as I achieved. Check the video and when I back off the volume of the guitar you get a reasonably cleanish sound although the grit is always there in the background.

If you are using single coils then you will probably not achieve the same sounds  - this is a rock amp and needs some drive to get the sounds out in the first place. Notice I did not demo a Stratocaster. Before anyone complains - I LIKE Fender Stratocaster's. Indeed one of my all time favorite guitars is Hendrix's Stratocaster from Woodstock. Believe it or not I even considered buying it when the Italian was bidding for it at that time. 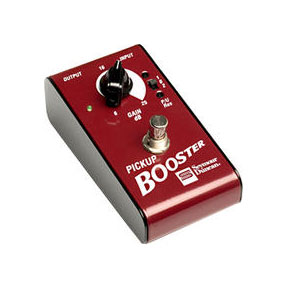 In any case, if you do have a Stratocaster and don't want to modify it in any way to get a GOOD sound I recommend the Seymour Duncan pickup booster (I have one myself) which can deliver up to 25db gain with NO DISTORTION - just plain old gain which I believe this amp will like. This is typically placed after the guitar and before the amp - you don't put these in the effects loop!

So if a Les Paul (worrying to say Gibson on a Slash page) is good enough for Slash himself then it is highly likely it will be good for you too.

Notice we have not even mentioned amp settings yet!

When it all comes down to it - we are all going to have our own amp settings no matter what I might say in this section - remember this is just a quick guide to get you moving forward a little in the quest for tone.

The Manual shows the settings which Slash uses in the AFD and #34 modes.

As you can see I like my amp HOT. It's no use pussyfooting about if you play rock right? at least that's my theory :-)

By all means go with the Slash settings if Slash is your thing - but Slash is not my thing I'm afraid so I had to mess about (almost said mesa boogie) a bit to get settings that work for me. You will see from the video that I do occasionally 'tap' the playing and to do that for my unusual method of tapping this is what I need on this amp. Other amps are a different setting again - it's all down to what 'feels' right to you so do experiment with this amp it is really very forgiving in this area and you might be hard pressed to get ANY bad sound out of it.

Last but not least is you. No matter what settings, pedals, cabs, speakers, guitars or all that other good stuff there is always one thing to remember from all of this - you will ALWAYS sound like you. Sure, all the Slash players will say they are the same, and the Jimmy Page players will say exactly the same thing about their 'god'. But seriously, there is more to that sound than any equipment can offer - it's all in the feel of the musician and you are NOT the same.

I do hope that this little section of the web has made you think a bit about your playing and your relationship (really) with the kit you use and maybe it will make you a better player than you already are.