The Roalnd Boss GT-8: I remember it well. Its a bit like remembering a nightmare. Like 'Thriller'. Here's the review that tells all about this effects processor from Roland Boss.

This looks such a great piece of kit - find out here, but before you read the in depth review on the GT-8 I want to tell you about a little problem I had with the GT-8. This is a great piece of kit for most things, but has a little shortcoming that you should know about, especially if you're going to buy one to use! Everything about this product is good, except the 'channel' or 'patch' switching of the 'midi' controller on this unit.

I decided (after Roland's magazine showed how to interface this pedal correctly in to a guitar amp) to try and get the GT-8 to control the Engl E670 Special Edition as seen elsewhere on this site. The GT-8 would NOT switch the simple preset in the Engl when I chose a new preset on the pedal. My Ground Control has been doing these things for some time. The GT-8 would switch another effects unit ok, but NOT the amp channel.

I pursued this right back to Roland UK. After a few weeks work off and on with them I was ready to throw the GT-8 in the dustbin - the support, while semi-reasonable was just about useless. I had comments like - we've never been asked this before, to, You're not setting it up right, It works with the Roland amp, or your Engl is clearly at fault. Multiplexed among all this hogwash from Roland UK was the fact that all my other pedals worked absolutely fine with the Engl. Unfortunately, I was also underestimated by the Roland team, and their conclusion that I did not know what I was doing was at one stage extremely annoying. Of course, none of these little ditties was correct. But that's the way support is on a non-pro piece of consumer equipment.

The simple fact is, that I could use ANY midi pedal and control the Engl easily, while the GT-8, even after 14 hours of work, including liaison with the Engl amp designer directly, I failed to make this switch a preset on an amp. The settings were definitely correct - I could control the volume on the amp, but that was about it. In FACT - the solution was that Roland basically refunded me the cost of this unit and I tried a Line 6 GT Live which, within 5 minutes of plugging in to the Engl was switching channels the same as every pedal I've ever owned - that is, except the GT-8.

Consider this - the GT-8 has a HARD WIRE amp switching feature and this costs money to include on every manufactured unit worldwide. Why include one of these particularly? Maybe that's because the midi is not quite what it should be when it comes down specifically to program changes. You make up your own mind. I made mine up by getting a refund and walking to a decently supported more pro orientated product that works first time without ANY aggravation whatsoever - and in fact you can do more with it! The support is better too, they know what they are talking about - assuming you're ever going to need them, which I doubt.

It's funny really. I used to have a BOSS GT-5 and thought that the GT-5 was the best bit of processing around at the time. I used to use it live and turned off the squawky amp emulations and speaker emulation because it was cr*p. The unit however, was built like a brick toilet and in all other ways was great - I even used it with my Boogie Mk IV live. I sold it (as you do) and regretted doing so. Much later, when the GT-6 became available, I thought that this would be a great improvement over the GT-5, so I bit the bullet and bought one. OOPS - one of the biggest mistakes of all time - the GT-6 was a very poor brother of the GT-5, in fact it was so bad in my view that within 2 months I had sold it and took the loss.

The GT-5 had great sounds (apart from the emulated amps) and this was what made this product great. The GT-6 had bad emulations, obscure effects and generally was not a cool bit of kit - I would not recommend a GT-6 to anyone. You might like it, think I'm telling porky's etc. etc. But from where I stand, using what I know, the GT-6 was not for me, where the GT-5 was great. I still have many friends who use the GT-5. The GT-6 did however introduce one thing over the GT-5 - knobs! These knobs allowed the simpleton to quickly set up a sound without learning anything new. i.e. the workings of the unit - they can be difficult to get your head around if you bother to KNOW the unit. So - an advancement - and just about the only improvement period, on this unit. 2005 appears.... step in the GT-8 and the GT-8 Pro (rack version).

What makes this unit good: The amp emulations are VERY good - so good in fact that if you take a boogie (in real life) and compare it to the sounds in the GT-8, then you are going to be shocked - because it's damn near the same! I tried also Marshall comparisons in real life and these were equally similar. I hate to say it, but for just around £320.00 pounds (street price UK) you will probably be buying a bargain of a lifetime (at least when this review was written (February 2005). It will be cheaper now. The GT-8 can do things your boogie, Marshall, Soldano, etc. can't do - and probably never will. For example imagine playing your guitar and not hitting the strings hard - you get a great effected (or otherwise) clean sound (lets call this sound 1). Pick the strings hard (like in a solo) and you get full on boogie (or any other amp emulation - lets call this sound 2). Not only that - but there's also a solo button to push the sound 2 channel to where it should be. This sounds strange - and it is - there is no comparison to any other product I have ever used that compares to this effect.

The GT-8 of course also includes many other sounds, effects, amps, etc. - in fact around 240 in total - which is a huge amount of ready to use sounds - and most of these are cool right out of the box. You can save up to 80 to user presets. I save a bank to a song usually for live work - I did this on the GT-5 also. You still have the idiot knobs as well, so if you want to just set up your own sounds easily then use these, I'll admit I do. The wah can emulate a number of wah pedals - and it does a stonking job - just as the GT-5 did. There are hundreds of other things good about this unit - buy one and you will probably agree.

But what's bad: Well, there are a number of things. Firstly the price (at that time). For this money you could buy other products that connect to the PC - for easier control, recording, rhythms, etc. The Digitech GNX4 does this (although I don't like the sounds). Some of the presets are average in my opinion - but not many. Also, unless you have the output set to desk/headphones you can't use the speaker emulator. Not a problem to some, but I would have liked the option for other uses. I tried the GT-8 through the live desk and the O2R in the studio - and I thought that it was very nasal and sounded horrible with the speaker emulator and without. But if you mike up an amp and cab it sounds awesome. The unit is a straight forward processor - no backing, recording, making tea in here. Compared to other units around it's particularly Spartan in this area. Not a problem for me, it's gives exactly what I want from it - a great sound firstly, then flexibility in use, then control, then ease of use, then... well you get the picture.

THE QUESTION IS: Does it allow me to sell my Marshall 2000 and Mesa Boogie kit? Sadly, no it does not. While it really is as good as I say it is, the real deal in all my kit is just better - but it feels different somehow (and my real kit looks awesome!) The GT-8 on the other hand is a black box on the floor, which looks just like all the other black boxes on the floor - and everyone and his dog is sure to have one of these. MAKE SURE YOU PUT IT THROUGH A REAL AMP - and not one of those tranny jobs - and you really will get the sound of your dreams from this processor. If you sell your amp - then oops... you will be buying another.

No - I would not buy another at any price. All I ask is that the unit should do what it says on the box - and this one fell short. It does have the benefit of one thing - when you call Roland UK tech support - they can call you an idiot too! Here's a link to Roland's site: www.roland.com 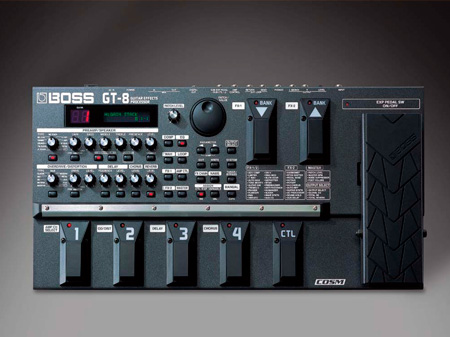 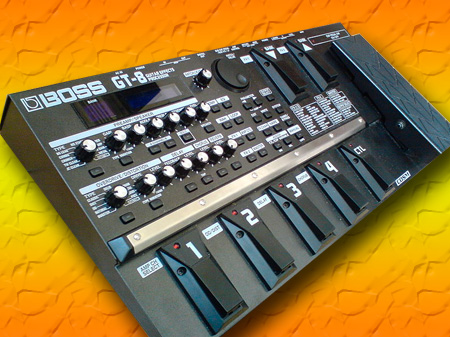 Hopefully you won't be disappointed if you buy one... but I did warn you!