Berner Street by Mckenzie and Bruce

Berner Street is a rock music album with a twist from Tony Mckenzie and Alan Bruce, check it out.

The Berner Street Album was a concept album derived from a marketing idea. Originally the concept revolved around getting sales for a music album and offering the buyers a different incentive than just the music which these days seems to be forever FREE to anyone but no one wants to pay for the work. Record companies have changed and now they know if they pursue your band usually your naivety will get your music for peanuts. It's probably always been that way thinking about it.

Now THATS A PROBLEM. Especially for the artist, who ends up working their souls off and getting little or no return for their hard work; copyright goes to the wind. So the scene was set to find another way to 'entice' customers to BUY the music physically (more of that later) and have a great reason to do so.

The reason being $10,000 to the winner of a puzzle which was set within the album and even with clues written right in to the tracks as the album developed. It actually took two years of developing the plot (around solving the 'Jack the Ripper' case). But being an 'expert' made little difference; as time eventually confirmed, no one won the prize.

Berner Street really was a new marketing concept and was an exciting and refreshing project to complete. Some of the music on this site comes from the Berner Street Album. The music remains as good as it always was well recorded and sounding very modern with many styles used to achieve the result. 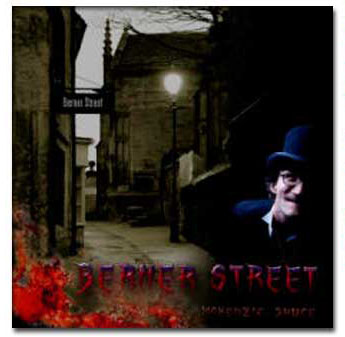 Berner Street was released by Mckenzie and Bruce in 2009.

The fact is, that we had a distribution deal with a distributor in Houston Texas, USA. But the 'distributor' of the albums (believe this or not) said he sold not a single copy in nine months. But later albums started to appear from all angles, eBay, Amazon, Russia, Japan, absolutely everywhere! Unfortunately we did not sell them to the world and he was the only other source? Let this be a lesson to other musicians.

Luckily we did sell the Berner Street album ourselves and promoted the album at the time, lucky for us. The lesson to learn of course is to trust absolutely no-one unless you really know their credibility and indeed whether they are completely trustworthy. Even contracts become useless unless you want to create a war zone in often a foreign land under their jurisdiction and that can cost a fortune so it all becomes a waste of time, effort and investment.

This album is still available for sale as a real CD and it has some really clever puzzles to solve within the music; but be prepared to spend a long time solving them. Great fun for sure.