I developed this custom stratocaster 'Blue' guitar from Fender parts and a fully custom Warmouth body and it is a really great stratocaster. I also used Seymour Duncan Antiquity pickups for this one which were at the time the first choice for the sound I wanted.

This guitar was completed in July 2011. The finished guitar was changed a little on specifications as parts became available as follows:

The guitar cost (here in the UK with that dreaded 20% tax) approximately £1400.00 (that's about $2000) but there is no way you can buy a guitar like this for the money from ANY manufacturer. Check it out - it could be the start of you building your own Stratocaster or other guitar too. But more importantly, if you want a Fender Stratocaster like this one, to buy from Fender would cost you a small fortune. It still will if you go to the lengths I did with this guitar - but I estimate about one quarter cost compared to Fender custom shop of the same thing (or indeed a PRS). Don't look to Fender - they don't have one of these and I guess the main reason is cost - its a very high end guitar.

This one was made in the Tony Mckenzie custom shop (my house) ;-) and is at least as good as any other 'custom' guitar even those from Fender. It is mainly a Fender Stratocaster anyway but not as you might know it. This uses Seymour Duncan Antiquity pickups (the hotter version) and many other great parts including a Jeff Beck original Fender neck. Ill be reviewing these separate when I get around to it. I also used a 'Bladerunner' tremolo recently developed in the USA and released in 'gold' finish to match the guitar. This proved to be a great improvement over the standard tremolo which I was going to use originally. This unit is also destined for review because most guys have not tried one yet.

I also used genuine Fender Locking tuners (gold) which were very expensive but finished off this guitar as I wanted it to look. The body cost over $1000 by itself from Warmoth and was a custom order... unfortunately they did not do what they were told.. but that's all in the build video of this guitar... watch it and learn about some of that stuff from me who suffered from a number of suppliers who could not do or supply what they were paid for. Warmoth issues are covered in the review of this guitar on this site and indeed in the videos of the build. The Warmoth body review is Body-Review-HERE

In any case the final guitar is exceptional and it sounds much better in real life than you might think. But don't look for timid sounds - I don't particularly play that way. Be loud and proud that's what I say :-) If you want the complete rundown on this guitar you can watch the videos on the video page on this site or better still - read the review of this guitar - you will learn all about suppliers that can not or just don't supply what you ask for... but they never seem to get the money wrong do they?

Here's a few pictures and click them for a larger view. 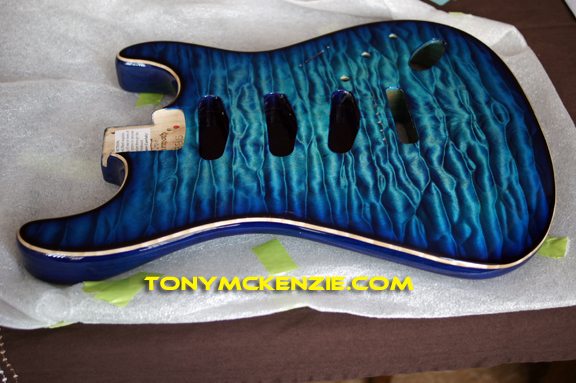 The body as delivered Angled view of the body 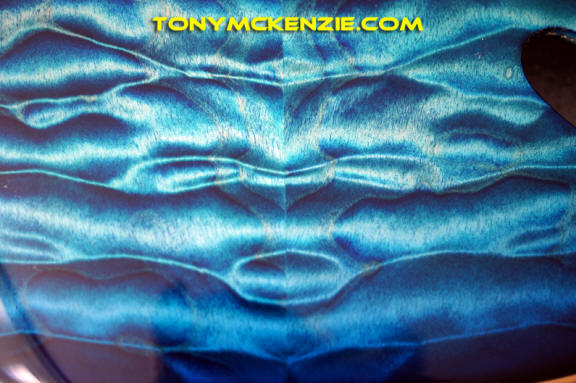 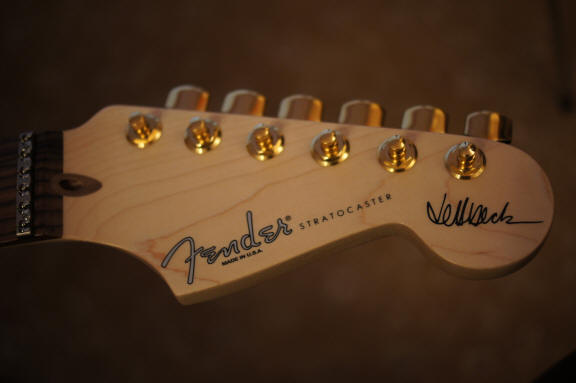 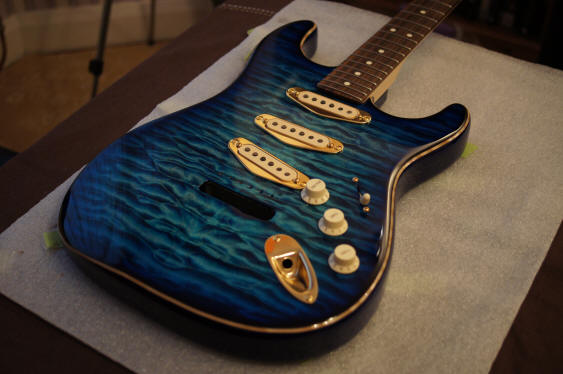