Finally! I hear you shout. Released at NAMM 2012 the Gibson Paul Landers Les Paul, the signature guitar for the legendary Rammstein guitarist. Now a worldwide phenomenon with an international die-hard following the Neue Deutsche Harte band from Berlin are the most successful German band ever. It will come as no surprise that the guitar was designed, in terms of looks and sound, in coherence with the bands reputation so expect dark aesthetics and heavy rock tones.

At first glance, the Gibson Paul Landers Les Paul looks similar to a Les Paul Custom with a plain satin finish, which is unusual in comparison to the typical gloss finish in standard Les Pauls, and contrasting silver binding. However it does obviously have a more minimalist design than the Custom. It is made from traditional weight-relieved mahogany, and the typical carved maple top. Again the neck is traditional mahogany and weighs approximately 8kg but surprisingly it has an obeche fingerboard, and no inlays, which emphasises this simplistic cool appearance. Whilst the neck profile is yet to be confirmed we would imagine it will be the rounded neck profile like his previous Les Paul. And just to add to the novelty factor there is a Paul Landers #1 coin attached to the headstock, which again is pretty damn cool.

Now the more technical bits, to give the Paul Landers Les Paul its very powerful tones it is loaded with high gain EMG humbuckers. For the popular clear, thick crunch it has an EMG-61 at the neck and for the cutting lead tones and iconic sustain it is equipped with an EMG-81 at the bridge. To keep with its stylistic, simplistic theme it only has one volume control and matching chrome Grover locking keystone tuners and a chrome Tune-o-matic bridge. This high output extreme industrial tone is pretty much fixed, so in terms of versatility it’s not great, but that’s not why you would buy a Paul Landers Les Paul.

I think this guitar is either a love it or hate it instrument; one argument is that it is under nourished in terms of features and accessories and that may be true but of course there is no right or wrong answer. Personally it is this simplicity that attracts me to it, I think it’s a refreshing change to see a guitar that’s not overcrowded with buttons and switches, simply plug in and play. Amp wise, you would need one capable of extremely high output, I would recommend the Mesa Boogie or the Engl Powerball, which are typically used by Rammstein. Remember this is a heavy rock guitar so if you’re thinking about buying one don’t be expecting subtlety, expect ground shaking tones and that’s no exaggeration. And if you’re a Rammstein fan, it’s a pretty safe bet that you’ll like it.

What the Gibson Paul Landers Les Paul  lacks in features it makes up in raw good looks and sheer power, and I mean sheer industrial power! So if you’re looking for a guitar with variety and an arsenal of switches and features then this isn’t it. But if you’re looking for a guitar that is capable of producing ridiculous rock tones and amazing looks then they don’t get any better than the Paul Landers Les Paul. It reminds me of the evil twin of a standard Les Paul, in the sense that visually it is almost identical, but has totally different characteristics and style to that of its brother.

The reason I have given the Gibson Paul Landers Les Paul such a high rating is because the whole point of signature guitars is recreating the artist’s style and beliefs and transferring them into a guitar for the world to share. Also being such a quality guitar it will hold its value, so in a few years when you’ve had you’re fill in wont depreciate in value.

That is what Gibson have managed to do perfectly, the guitar may be simple but so was Rammstein’s songs, does that mean they weren’t good? No! In fact that’s what made them what they are.

And I just can’t emphasise enough how good it looks, and I would even go as far as saying it’s the nicest looking Les Paul ever made! 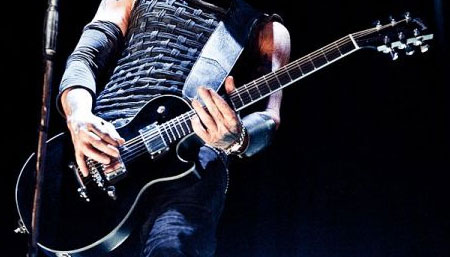 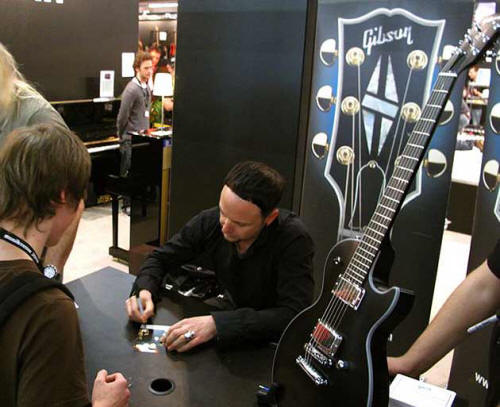 All images (c) their respective owners.